"Out of the Picture"

"Don't Wake Patrick"
"Feral Friends" is a SpongeBob SquarePants episode from season 10. In this episode, a weird moon turns everyone in the city into wild animals, and Sandy is the only one who can save them.

In the beginning of the episode, Patchy arrives on a boat to the water above Bikini Bottom, saying that he and Potty are there to witness an event happening once every 100 years. He and Potty have a little argument. After that, he takes a telescope and looks underwater.

Sandy is having a birthday party with her friends at Jellyfish Fields. Patrick eats her entire birthday cake, but SpongeBob brings a backup cake. Patrick is about to eat her backup cake in one bite again and then Sandy karate-chops a slice for everyone. Then, SpongeBob says he made the cake especially for Sandy. Squidward asks SpongeBob if it contains nuts since he is allergic. SpongeBob says that it doesn't, but he counts walnuts. Squidward then gets an allergic reaction.

A sudden earthquake happens. A big, shiny green rock arises out of a nearby volcano and is seen floating in the sky. Everyone notices it as the moon. Sandy, however, says that the moon comes out only at night. The green moon floats above a group of fish playing with a ball, turning them into real-looking and biologically-accurate fish. Sandy notices that every sea creature (including her friends) are enchanted by the green moon. Another fish, flying a kite, turns into a real-looking fish model, and eats the kite. SpongeBob and Patrick run toward the green moon. Sandy tries to save them, but she is too late and they turn into a realistic sea sponge (albeit a kitchen-sponge shaped one) and a real sea star. They then start to crawl around. Sandy tries to warn the rest of her friends to hide from the green light, and run to the shade; however, they are enchanted by the light and do not follow. Mrs. Puff and Mr. Krabs are de-evolved by the green light into a puffer fish and scavenger crab, respectively.

Pearl is seen talking on her cellphone, saying that her friends should go outside and see that "awesome moon." She takes a picture with her phone, then turns into a realistic sperm whale by the green light. The cellphone talks "Hello? Hello, Pearl?" until Pearl eats it. Then the green light turns Larry into a realistic lobster, now unable to lift weights.

The green light is about to reach Sandy and she is scared, but when it crosses her, it does nothing to her. She assumes it happens only for sea creatures, yet she doesn't understand why this green moon turns all the sea creatures into wild fish.

She is starting to question if she's the only one left normal. Squidward comes out of the bathroom. She runs towards him and grabs him in order to place him in the shadows, away from the green light. She throws and pushes him under a small rock. Squidward demands an explanation.

Sandy says she just has to keep Squidward in the shadows for two hours. Squidward peeks out from under the rock and sees several giant fish eating each other while Sandy finishes her phone call with the French Narrator. Squidward runs in panic to his house (and towards the moon) to save himself from being eaten. Sandy shouts that he needs to stay in the shadows. Squidward falls over, when a big, purple fish approaches and is about to eat him. Luckily, Neptune's Moon is passing over, turning Squidward into a big, realistic octopus, who eats the purple fish.

Sandy is afraid that Squidward will eat the rest of her friends if she doesn't act quickly. She collects them all in a jellyfishing net, then rides on Pearl's tail. During the ride, Sandy bumps into Pearl's breathing-hole, only being blown to the air and hit by an airplane. The airplane contains only non-anthropomorphic fish, including the pilots, who are unable to control the plane and cause it to crash. Sandy lands back on Pearl's tail.

Neptune's Moon reaches the center of Bikini Bottom. Sandy tries to warn all of the fish, but no one seems to notice. An officer asking for a driving license from a driver is seen, when both fish are turned by the green light into realistic fish.

Pearl is leaving the town and goes up. Sandy warns everyone to hold on. Then, Pearl approaches Patchy's boat, who is afraid of the coming whale. He tries to sail away, but he doesn't make it, and Pearl jumps above Patchy's boat. The jump splashes water into the boat, and Patchy tries to get the water out. He unsuccessfully asks Potty for help, then shouts that Potty needs to go away. Patchy decides to do it all by himself. Pearl goes back down, and Sandy jumps off her tail when she reaches her house.

The scene cuts to show all of Sandy's friends in an aquarium (minus Pearl and Squidward, who are too big to contain) at her treedome when Sandy tries to feed them. Sandy picks up another phone call with the French Narrator, asking him to explain more about her fish friends. He begins to explain every creature, but, while explaining about the scavenger crab and the puffer fish, Mr. Krabs and Mrs. Puff fight for a while, until Sandy picks them up, saying that she knows she would have to set them apart. The French Narrator continues explaining about the creatures and Sandy takes a picture of the primitive sponge.

Squidward suddenly shows up at Sandy's treedome and starts to climb on top of It. The French Narrator explains about the octopus. Sandy is nervous, but says that her dome is made of pressure-resistant glass, but the French Narrator warns Sandy that giant octopuses can cut through hard materials using their beaks. The scene shows Squidward cutting a hole in the dome using his beak. The water starts to fill the dome. Sandy's aquarium friends start to float around. Squidward further breaks Sandy's dome and tries to eat her and her friends. Sandy throws her friends into her tree, then tries to escape.

Squidward succeeds to hold Sandy and to insert his mouth and teeth into her tree, getting her aquarium friends cornered. The French Narrator says something about the climax of the battle. The French Narrator reminds Sandy she must remember who the giant octopus's natural enemy is. Then she remembers, frees herself from Squidward and uses her tail to create echolocation and summon the natural enemy of the octopus, the whale. As Pearl and Squidward are fighting, Sandy's aquarium friends run towards her.

Sandy notices the 2 hours are up. The French Narrator says that Neptune's Moon goes to the other volcano and that they'll see it again in 100 years. Then, he yells "Goal!" like in soccer.

Everyone turns back to normal, but due to the effects of Neptune's Moon, their clothes disappear and they end up naked. Everyone except SpongeBob and Patrick run away and SpongeBob asks Sandy why her treedome is broken and everyone's naked. Sandy responds that it has been the most interesting birthday that she ever had. The French Narrator says that after Neptune's Moon is followed by Neptune's sun. A sudden earthquake happens, followed by a red and yellow ball floating out of a volcano; which floats above Patrick, Sandy and SpongeBob. It only affects Sandy, though, and she turns into a realistic squirrel.

The scene goes back to the island above Bikini Bottom, where the French Narrator says that Bikini Bottom is full of life and mysteries. He says that the whale music is for his beloved squirrel. The scene shows a live-action Sandy water skiing on the surface of the water, passing by Patchy's boat. Patchy's boat is sinking, and has a shark around it. He says to Potty that he never thought he would end as a shark's meal. They both accept their end, when they realize the shark fin is actually the French Narrator in his scuba-suit. They seem to know each other.

The French Narrator says to Patchy that he came to warn him about Neptune's Sun, but it is too late, and goes away. Patchy does not understand what "Neptune's Sun" means. Then, Neptune's Sun appears above his boat, turning Patchy into a caveman and Potty into a pterodactyl (different than their "Ugh" designs). Prehistoric Potty thinks Patchy is a patty. He picks Patchy up and flies away, as the episode ends.

The episode name was confirmed in a tweet by Vincent Waller on November 12, 2016.[1]

Sandy is a daredevil 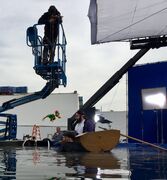 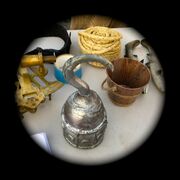