View source
If you were looking for the article about the song, then see F.U.N. Song.

The episode begins with business as usual at the Krusty Krab, until suddenly, an alarm begins to blare, signaling an attempt by Plankton to steal a Krabby Patty. Plankton, patty in tow, escapes outside by making a hole in the door with a laser.

SpongeBob heroically chases after him. After a long chase across the cityscape, SpongeBob finally recovers the Krabby Patty and is congratulated by the townsfolk, while Plankton walks home downcast. SpongeBob, feeling sorry for Plankton, decides to befriend him.

SpongeBob invites Plankton to go jellyfishing with him. Realizing he can take advantage of SpongeBob, Plankton goes. At Jellyfish Fields, Plankton remains fixated on evil and destruction, while SpongeBob tries to explain fun to him by singing "The F.U.N. song." Eventually, Plankton starts singing the song as well, first, he sings his own version with violent lyrics, but eventually, he sings SpongeBob's version and seems to finally be having fun. He seems to forget about stealing the formula and begins to develop a genuine sense of friendship.

When Mr. Krabs sees this, he refuses to believe that Plankton has changed, and sets up a trap for them when he goes to the Krusty Krab to meet SpongeBob the next day. He attempts to tempt Plankton with a Krabby Patty, but Plankton sits motionless and apathetic with the patty in front of him. After SpongeBob and Plankton leave to go to the movies, Mr. Krabs begins to suspect that Plankton really has gone straight and nice, until he realizes that he actually did take the patty.

At the Reef Cinema, Mr. Krabs appears in front of the projector and demands everyone in the theater to reach into their friend or partner's pocket to see what they have got. SpongeBob reaches into Plankton's pocket and finds a Krabby Patty. SpongeBob realizes that Plankton used him to get a Krabby Patty. Plankton attempts to explain that he realizes now that he only ever wanted friendship, before admitting to everything and running off with the patty through the movie screen, tearing it in half in the process.

SpongeBob believes Plankton won, but Mr. Krabs tells him he did not. He shows SpongeBob behind the screen, revealing Plankton to be badly squashed on a damaged concrete wall with the Patty. SpongeBob apologizes to Mr. Krabs and they decide to go back to the Krusty Krab and have a fresh Krabby Patty. Mr. Krabs flicks Plankton off the wall and onto Bubble Bass' hand, where he mistakes Plankton for a jelly bean. Bubble Bass chases Plankton around his hand with him screaming, concluding the episode. 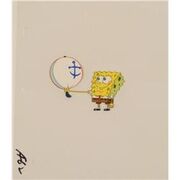 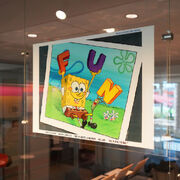 Plankton and the Krabby Patty 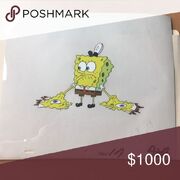