"It Came from Goo Lagoon"
"Evil Spatula" is a SpongeBob SquarePants episode from Season 9. In this episode, SpongeBob takes evasive action and replaces his spatula.

Mr. Krabs and SpongeBob are cleaning out their customers' money. SpongeBob and Mr. Krabs create a formula designed to clean the dirty money they receive. Unfortunately, SpongeBob uses too much of an explosive ingredient, which causes their faces to be blown off. SpongeBob notices a fax coming, but Mr. Krabs says that they will get it later. It is none other than Plankton, who had faxed himself into the Krusty Krab, saying the first phase of his plan is complete. Plankton then starts "Phase 2" by sawing a bit of SpongeBob's spatula, then places it beside the grill. SpongeBob then comes along and tries to flip a Krabby Patty, but his spatula breaks in half. He tries everything to fix it, but Mr. Krabs just tells SpongeBob to get a new spatula, and he leaves.

The scene changes to Harvey's Spatula Emporium, where Plankton awaits for SpongeBob's arrival. He then begins "Phase 3" by flying out of the store with his jetpack and flies into SpongeBob. SpongeBob wants to know what is Plankton doing at the Emporium, and Plankton responds to holding an object, saying SpongeBob does not know what it is. SpongeBob successfully identifies the part as a handle cap for a vintage spatula, and Plankton is amazed. Plankton then offers SpongeBob his own special spatula with "magical powers," which SpongeBob quickly agrees. They arrive at the Chum Bucket, where Plankton shows off a room full of spatulas and introduces SpongeBob to the Majestic Sizzlemaster. SpongeBob is excited, and takes his new spatula out of the Chum Bucket. Plankton starts "Phase 4," with Karen questioning on how many phases he has in his plan. Plankton then heads into the control room, with Karen saying that it is enough to gain SpongeBob's trust and steal the Krabby Patty Secret Formula. Plankton then turns on the spatula and the scene changes to SpongeBob showing off the Majestic Sizzlemaster to Mr. Krabs. Mr. Krabs just tells SpongeBob to get back to work, and SpongeBob heads into the kitchen with the Sizzlemaster. SpongeBob is about to handle all of the orders coming in and the Sizzlemaster soon starts talking, not knowing it is Plankton talking through the other end. SpongeBob is confused, trying not to believe the Sizzlemaster is talking, but Squidward shouts out to him, saying the customers are getting upset. SpongeBob starts to flip the Krabby Patties, but the Sizzlemaster tells SpongeBob that there is a faster way of doing that and it extends its head, flipping four Patties at the same time. SpongeBob is amazed, but still says that they are a long way from completing all of the orders and starts alternating between putting condiments on the buns and flipping the Krabby Patties. The Sizzlemaster (Plankton) tells SpongeBob that it will flip the patties while he handles the condiments. SpongeBob agrees, but says that he will handle the grill, saying he does not trust anybody with it.

SpongeBob is upset, but the Sizzlemaster suggests getting the Secret Formula to make more Krabby Patties. SpongeBob agrees and walks into Mr. Krabs' office and starts unlocking the safe. Mr. Krabs asks SpongeBob what he is doing, and SpongeBob says that the Sizzlemaster he got from Plankton needs to know the Secret Formula, making Mr. Krabs suspicious. Realizing that it is another one of Plankton's schemes, Mr. Krabs then starts telling the ingredients for a fake formula and Plankton starts adding them in. After pouring an entire bottle of Disulfide (explosive bottle), Plankton does not know that it is approved for restaurant use until he hears Mr. Krabs saying that it is not. Plankton looks at the label too late, then the entire Chum Bucket is blown up, and Plankton and Karen land in front of Mr. Krabs and SpongeBob. Mr. Krabs and SpongeBob gloat and Plankton sarcastically laughs, as the episode ends.

The Promo for this episode that was released near the premiere and promoted the marathon as "SpongeBob's Grillin' and Villain Saturday." 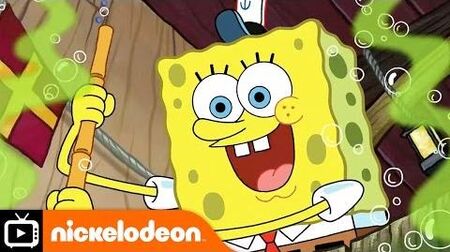