Erik Wiese is a writer and storyboard artist who has worked on the animated series SpongeBob SquarePants for six seasons, beginning with his character development and design for the pilot, "Help Wanted."

Erik Wiese also served as a storyboard supervisor in The SpongeBob Movie: Sponge Out of Water. 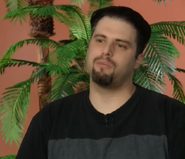