View source
If you were looking for the article about the SpongeBob SquarePants season 5 episode, then see Krabs à la Mode.

"Lost in Couch"
"Enemies à la Mode" is a The Patrick Star Show episode from season 1. In this episode, the members of the Star family each confront their own absurd rivalries, while Patrick struggles to get ice cream.

The episode starts as Patrick spins a wheel to choose the day's show. 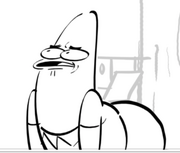