Sponge on the Run on Netflix! 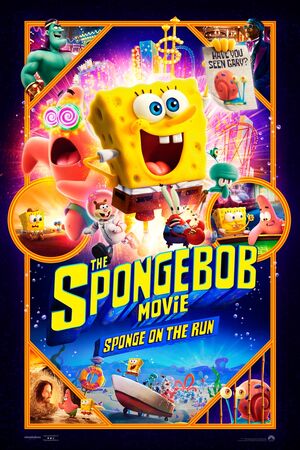 The SpongeBob Movie: Sponge on the Run has come to Netflix internationally!

In this movie, SpongeBob and Patrick go on a rescue mission to save Gary, who's been snailnapped by Poseidon and taken to the Lost City of Atlantic City.

Having originally been slated to premiere in theatres on May 22, 2020 the movie was delayed due to the COVID-19 pandemic. Since releasing in a limited number of theatres around the world, the movie is now to set for a wide international release. A release in the US is scheduled for 2021.

A spin-off series for the movie titled Kamp Koral: SpongeBob's Under Years is set to premiere in 2021. In the series, SpongeBob and friends spend the summer catching jellyfish, building camp-fires, and swimming in Lake Yuckymuck at Camp Coral, located in the Kelp Forest.

Are you excited for the movie? Read more!

Retrieved from "https://spongebob.fandom.com/wiki/Encyclopedia_SpongeBobia?oldid=3389677"
Community content is available under CC-BY-SA unless otherwise noted.