This is the page about the video game. For other uses, see Employee of the Month (disambiguation).
Video game
Gallery

Despite its title, it's not related to the season 1 episode of the same name.

The cover illustrates a smiling SpongeBob in the Krusty Krab's kitchen, wearing his employee hat and holding a black-handled gray spatula in his right hand. A golden frame surrounds SpongeBob, with a plaque on the bottom that reads the game's title, and the series logo at the top left-hand corner.

"Chapter 1: Employee of the Year"

SpongeBob and Patrick get on the bus but suddenly, the weather gets really bad, so they get lost and end up in Rock Bottom (again). The goal is to figure out why the weather is stormy, and to fix it.

"Chapter 3: Back to Square One"

They get out of Rock Bottom, but SpongeBob and Patrick do some annoying things on the bus, so the bus driver tricks them and says that the bus ran out of gas. They get left behind and have to find a new way to get to Neptune's Paradise. The goal is to get on Sandy's rocket.

The oxygen fuel tank in Sandy's rocket runs out of oxygen (thanks to Patrick stepping on the gas pump), and they get stuck in Bottoms Up. The goal is to get the oxygen tanks filled at a place called Oxygen Springs so that SpongeBob and Patrick can get to Neptune's Paradise. But the real question is: "where will SpongeBob find a jacket?"

In the ending sequence, SpongeBob and his friends get to Neptune's Paradise, but an employee tells them that the park is closed to make way for a private party, breaking SpongeBob and Patrick's hearts. SpongeBob and Patrick cry (although he was only yelling and banging his arms/legs on the floor as if he was having a tantrum). He says it is "SpringBoob SquirePin's" party, and Sandy tells him that he made an error in pronunciation. SpongeBob and Patrick are overjoyed as their hearts are fixed, and several characters that they met throughout the game jump out and say: "Surprise!" They all ride the rides and have a lot of fun.

The ending shows them all leaving Neptune's Paradise, except Patrick, who is still on a ride. 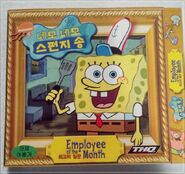 Korean cover
Bus to catch I Screenshot 20190606-103656.png
SpongeBob trying to get in the bus while Patrick taking picture
Add a photo to this gallery

Retrieved from "https://spongebob.fandom.com/wiki/Employee_of_the_Month_(video_game)?oldid=2180842"
Community content is available under CC-BY-SA unless otherwise noted.