"Enemy In-Law"
"Dunces and Dragons" is a SpongeBob SquarePants episode from season 4. In this episode, after a jousting accident, SpongeBob and Patrick accidentally travel back in time to the Middle Ages.

In the beginning of the episode, SpongeBob and Patrick are running up to the Medieval Moments stadium/restaurant to watch the jousting tournament. Upon their arrival, Morrie announces the tournament of The Horse Fight and asks for two volunteers to take part in the jousting, choosing SpongeBob and Patrick. Unaware that they are actually going to be in the tournament, and not just watching up close, they are forced to mount seahorses and start jousting against each other. They are both launched off of their seahorses into the air and land in a small field in 12th Century Bikini Bottom.

A large group of knights on seahorses surround the duo. They lock SpongeBob and Patrick in the dungeons, because they think they are evil. There they see an octopus playing a clarinet and failing. He expresses displeasure at this and promptly curses his descendant should he continue to fail. They think it is Squidward, but the octopus' name is actually Squidly. In the meantime, SpongeBob and Patrick still think this is part of the Medieval Moments tournament, until Squidly tells them about a Dragon Jellyfish zapping around the village, making SpongeBob and Patrick realize they went back in time.

Later, SpongeBob, Patrick, and Squidly are sent to King Krabs, who orders them to be executed because of an insulting song they sing in front of him. However, Princess Pearl reminds her dad of a prophecy in a stained glass window, which says that two brave knights will fall from the sky and will be sent by the king and defeat the dragon controlled by the evil wizard Planktonamor that is destroying the kingdom. Just then, the Dragon Jellyfish smashes through the wall with the prophecy on it.

Under Planktonamor's orders, it kidnaps Pearl in order to kill her and effortlessly flicks King Krabs into the guillotine, smashing it just before SpongeBob can be executed. The dragon flies away, and King Krabs, who realized they are the chosen ones, begs SpongeBob and Patrick with forgiveness and tells them to rescue his daughter, treating them like royalty, and Squidly comes along as well after orders from King Krabs.

On the way, they stop off at the Blacksmith's shop to get some armor and weapons, only to find that all of the weapons are too heavy except for the jellyfish net. As they reach the bridge to Planktonamor's tower, they are attacked by a Dark Knight, who guards the bridge. The Dark Knight is revealed to be none-other than a medieval Sandy. A duel ensues, with SpongeBob ultimately winning due to his karate prowess. After the battle, SpongeBob decides to spare her life. Amazed, the Dark Knight decides to follow SpongeBob, Patrick, and Squidly on their quest and learn a trifle of karate, according to her.

Back at the King's castle, Krabs receives a note saying that Princess Pearl will die if he does not hand over the village and his throne. SpongeBob, Patrick, Squidly, and the Dark Knight make an incredibly long journey to the top of the tower, where SpongeBob distracts Planktonamor while Patrick, Squidly, and the Dark Knight try to rescue Pearl. However, the Dragon soon arrives and manages to zap the heroes. Just as the Dragon is about to finish off SpongeBob, he pulls out a Krabby Patty he had been saving for lunch. The Dragon eats it and likes it so much that it becomes obedient to SpongeBob, zapping Planktonamor. The heroes return to the village to have their victory celebrated, and King Krabs is seen cooking Krabby Patties for the dragon. However, as soon as Squidly starts playing his clarinet, everybody hates it, and someone throws a rock at him. He bumps into the seahorses behind him, scaring them and launch SpongeBob and Patrick into the air.

They land back at the jousting tournament in the present, where SpongeBob thinks and tells Patrick that all of this was just a dream. However, Patrick sits up revealing he had squashed Squidly, who is accidentally sent to the present as well, as the episode ends.

An ad for the Lost in Time DVD feature in a Hi Hi Puffy AmiYumi comic.[3]

An ad for the special in the same Hi Hi Puffy AmiYumi comic.

Magazine ad for this episode 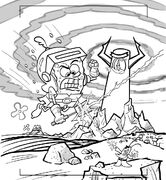 On the Season 4 Volume 1 DVD, The Complete Fourth Season, 2-Season TV Pack and The Third & Fourth Seasons DVDs, the storyboard shows SpongeBob and Patrick making sure they are okay after falling out of the sky. The rough storyboard also included a scene in which human-like "doppelgängers" of SpongeBob and Patrick appear. Patrick's doppelgänger wears a pointed hat and SpongeBob's doppelgänger has a neat, square-trimmed haircut.