After Patrick accidentally brings DoodleBob back to life, SpongeBob draws a hero called DoodlePants to fight the army of evil doodles that DoodleBob created.

The game begins with the clumsy artist out at sea on a small boat drawing when he drops two pencils into the ocean. One of the pencils lands on Patrick's head (while he was practicing his counting) and the other pencil lands a far distance behind him. Patrick recalls that the pencil can bring drawings to life, however, there is one thing he is not allowed to draw. He sketches the forbidden drawing on the ground trying to remember it. The drawing turns out to be DoodleBob (from a SpongeBob episode, "Frankendoodle," in season 2) who springs back to life, steals Patrick's pencil, and runs off to downtown Bikini Bottom.

Patrick is really worried about what he has done but is then visited by SpongeBob. When Patrick tells SpongeBob of DoodleBob's return, he too becomes worried. When SpongeBob tries to find a solution, he finds the second pencil, which he and Patrick can use to draw a hero to fend off DoodleBob's evil. This is where the player is able to draw their hero. SpongeBob and Patrick name the hero DoodlePants but shortly after his creation, SpongeBob is captured by DoodleBob's Doodle Dude Army.

After SpongeBob's rescue, the trio is informed by Squidward that Bikini Bottom is in complete turmoil ever since DoodleBob's return. DoodlePants then must try to bring all of the Bikini Bottom residents back. After four levels, DoodlePants, SpongeBob, Patrick, and Squidward come to the presence of a giant Doodle Tower which is creating Doodle Dudes. DoodlePants then climbs to the top of the building and fights a giant Doodle Robot, named Doodled. When the Robot is defeated, the group then catches up with DoodleBob, who runs into the forest with a rocket and a submarine. The group reaches a drawn pyramid which is where DoodleBob is hiding. DoodlePants goes in to fight DoodleBob but before he's fully defeated, he escapes the pyramid and disappears. The group suspects that either DoodleBob used the submarine to go to the deeper part of the ocean or the rocket to the moon. They go to the deep Pacific which consists of Rock Bottom and The Flying Dutchman's Graveyard. When they reach the Dutchman's Ship, The Flying Dutchman tells them that they are responsible for Doodle Dudes taking over his ship. He is informed of this by Doodle Patrick, Patrick's much more intelligent drawn counterpart. DoodlePants, SpongeBob, Patrick, and Squidward deny this but when Patrick slips out that he brought DoodleBob back to life, the Flying Dutchman puts the group in charge of getting rid of the Doodle Dudes from his ship. After this, DoodlePants must defeat Doodle Patrick after escaping ghosts in the ship. When Doodle Patrick is defeated, the Dutchman will figure out that it was he who ruined his ship. DoodleBob is not there, so the player must draw a rocket to go to space. After you beat that level and go to space and beat more levels, you'll find a replica of Bikini Bottom, aptly named 'Bikini Doodle'. DoodleBob temporarily resides here, but he slips away from Bikini Doodle after the fight that ensued there. DoodleBob escapes to a nearby asteroid and grows huge, coating himself in Doodle Goo. After you defeat DoodleBob once and for all, Squidward expresses his desire to erase DoodleBob for good, but SpongeBob figures that DoodleBob just wanted friends, and the player has to draw a smiling face on DoodleBob. SpongeBob, Patrick, and Squidward return home to Bikini Bottom, and DoodleBob, who is now good and has made friends with everyone, stay on the moon with DoodlePants. The credits roll, and then Notebook World, a bonus world, is unlocked. After a long bout of puzzles, the last boss to beat in the bonus world turns out to be the Squid Doodle that Patrick had drawn in the episode, "Frankendoodle."

Each of these power-ups last for 30 seconds when collected, but can be stacked on top of one another (i.e. if you have a power-up active and you collect another of the same power-up, it adds an extra 30 seconds to the timer). If you collect a power-up that's different than the one you currently have active, it gets stored in an inventory screen which can hold one extra power-up at a time.

Similarities with Drawn to Life

Differences from Drawn to Life 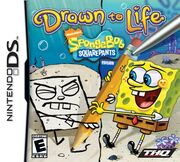 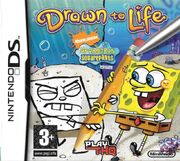 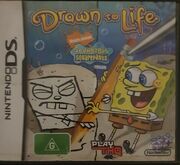 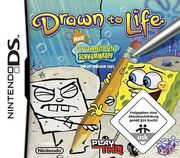 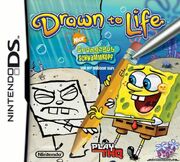 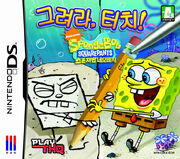