Doodle Patrick is a major antagonist of the video games Drawn to Life: SpongeBob SquarePants Edition and Hero's Choice.

He appears as a crudely drawn version of Patrick Star, but he is much smarter.

He has a very easy strategy. He rolls around the screen and occasionally jumps off it and falls down, causing a shockwave to roll across the ground on both sides. He also runs around the room. It is very hard to hit him. The only second to hit him is when he is not doing anything. 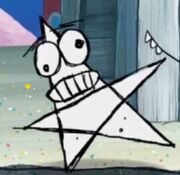 Add a photo to this gallery
Retrieved from "https://spongebob.fandom.com/wiki/Doodle_Patrick?oldid=2615432"
Community content is available under CC-BY-SA unless otherwise noted.