View source
watch 01:35
Spongebob Recap: Doodle Dimension
Do you like this video?
Play Sound
If you were looking for the article about the location, then see Doodle Dimension (location).

"Moving Bubble Bass"
"Doodle Dimension" is a SpongeBob SquarePants episode from Season 11. In this episode, SpongeBob and Patrick become trapped in an alternate dimension where anything they draw comes to life.

The episode starts with SpongeBob and Patrick going to Sandy's house for presenting to her Squeaky, an orange balloon, only to see that Sandy is working on a portal that takes you to any dimension. When Sandy goes to get something, SpongeBob and Patrick play with the controls of the machine, eventually clicking the button to open it. Despite Sandy's warnings, they accidentally enter the portal and travel to a completely white dimension. The two get scared at first, but realize they can draw whatever they want in the dimension. However, they still miss their friends, and Patrick, missing SpongeBob despite being next to him, draws DoodleBob.

DoodleBob ties Patrick on a rope and takes him to a castle, forcing SpongeBob to save him. SpongeBob starts going to DoodleBob's castle, but gets hit with several objects, including Patrick. DoodleBob draws up many smaller DoodleBobs to attack them, but SpongeBob draws a door to hide from the doodles. Unfortunately, Patrick accidentally calls them back, and the two are now surrounded by doodles.

SpongeBob and Patrick return to their own dimension, with Sandy's confusion, and the episode ends with the old coot claiming to her for giving back his nuts. 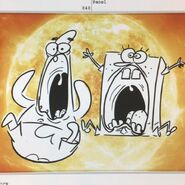 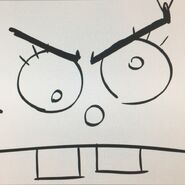