"Doing Time" is a SpongeBob SquarePants episode from season three. In this episode, SpongeBob and Patrick try to break Mrs. Puff out of jail.

Note: There is an asterisk (*) icon for all of these characters, except possibly Mrs. Puff and SpongeBob, who are exclusively their daydream versions. 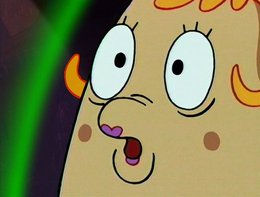 SpongeBob is taking his driver's license exam yet again and ends up leaving the driving course and wrecking the boating school and the city before driving off an unfinished bridge the mayor just opened, and falling into an abyss. The police follow the boat and end up driving off the bridge and into the abyss themselves. When SpongeBob, Mrs. Puff, and the police land, they all land on top of a truck full of fruit punch which is being delivered to Shady Shoals Rest Home, causing it to fall over and spill all the punch. The rest home gets flooded with it as a result. Although SpongeBob is responsible, Mrs. Puff is sent to prison for gross negligence. In prison, she realizes that she'll never see SpongeBob again, and starts to enjoy it.

Meanwhile, SpongeBob is depressed that Mrs. Puff is in jail and Patrick tells him it is his fault. The duo sets out to free her from jail. First, they try to rob the "1st Nautical Bank" in order to get arrested themselves but fail. Next, they disguise themselves as rocks that the prisoners are made to smash as labor, and try to communicate with Mrs. Puff, who calls the guards, but they dismiss it as a hallucination and move her to kitchen duty. SpongeBob and Patrick are then smashed by another inmate, costing them their deposit on the costumes. They then hide in a vat of chili in the cafeteria and offer to help Mrs. Puff escape through it, but she explains to them that she likes it in prison, which SpongeBob refuses to believe. He worries that Mrs. Puff is completely institutionalized in Prison and he needed to get her out. So SpongeBob tells Mrs. Puff if she can escape, he will stay after school and decorate the entire classroom, but Mrs. Puff refuses. She calls for the prison guards again and is reassigned again after the prison guards believe that Mrs. Puff is going crazy.

Retrieved from "https://spongebob.fandom.com/wiki/Doing_Time?oldid=3121332"
Community content is available under CC-BY-SA unless otherwise noted.