View source
This is the page about the mercenary. For other uses, see Dennis (disambiguation).
Character
Gallery
Appearances

Dennis the Hitman, better known simply as Dennis, is a fish who is the secondary antagonist of The SpongeBob SquarePants Movie.

He has a muscular physique, light olive-green skin and wears a black cowboy hat, red bandana with white crosses covering his mouth, a belt with an angry skull with cracks at the top, sunglasses (two pairs), a knife necklace, a gray shirt, leather black pants, light gray shoulder pads, a black vest with his name on the back, and black biker boots on his feet, which have white, metal spikes hidden underneath, of which is his weapon of choice for his task to kill SpongeBob and Patrick.

On his right hand-shaped fin, he wears a black, fingerless glove that trails a few inches up the wrist. This glove is covered in similar, yet less sharp spikes. Under his right shoulder pad is a gray flap, overlapping a darker gray flap.

Dennis retains his overall appearance, but he is now depicted with a black ponytail underneath his hat, and with scars on both sides of his face. Also, his shirt is changed from gray to white and his pants are changed to blue.

In "Captain Pipsqueak", Dennis retains his design from the movie, but his clothes use the colors from the video game. Also, his hat is now brown, his shades are blue, his shoulder pads are black, but the spikes are still grey, and his skin is a brighter green. His knife handle is also white.

He has the same appearance as in the film but without the bandana, shades, and hat, with his ponytail from the game in its place.

Dennis is a deadly, sadistic, callous, fearless, dangerous, cruel, truculent, and notorious individual, as he holds an illegal occupation title and poses a threatening appearance. He is intimidating towards and even tougher than most fish in the sea; he rips off the mouths of two hillbillies, and brutally assaults the Thug Tug leader, Victor.

Dennis is a mercenary that is hired by Plankton to kill SpongeBob and Patrick. The reason for this is that Plankton stole King Neptune's crown and tricked Neptune into believing the crime was committed by Mr. Krabs, so Neptune threatened to execute Krabs unless the crown is retrieved within a period of six days; Plankton obviously wants Krabs to die from a painful and wrongful execution, and upon learning about SpongeBob and Patrick's journey to get the crown back from Shell City, he knew that Neptune would discover that Plankton was the thief, so he sends Dennis to kill them before they get there.

During the journey, Dennis encounters the gas station that SpongeBob and Patrick had gone past earlier, and examines a sesame seed from the Patty Wagon. Floyd and Lloyd proceed to insult him, making fun of his hat, so he rips their mouths off before moving on.

Later, as SpongeBob and Patrick are being chased by the frog fish monster, Dennis stops at the Thug Tug. He finds some bubble soap and blows a bubble with it, which shows an image of SpongeBob and Patrick inside. He is then confronted by Victor and the patrons, who begin to recite their brutal anti-bubble blowing "baby" policy. However, before they can finish it, Dennis upper-cuts Victor, sending him flying to the bar and causing it to sink. Dennis then continues his tracking pursuit for his targets.

SpongeBob and Patrick encounter Dennis for the first time after reaching the outskirts of Shell City. Dennis explains to them that he is a hitman hired to exterminate them. SpongeBob and Patrick laugh him off, believing that they are "invincible men" with the seaweed "mustaches" that Mindy gave them earlier. Dennis rips them off like he did with Floyd and Lloyd's mouths earlier and reveals to them that they are fake, growing a real mustache himself to prove it.

As SpongeBob and Patrick tremble with fear, their "masculinity" proven to be a sham, Dennis explains that Plankton sent him to step on them so they wouldn't find out that he actually stole the crown. Having revealed enough information, Dennis prepares to kill them with his "big," spiky boot, all the while cackling about how he loves his job, only to be stepped on by the Cyclops' "bigger boot."

In the climax of the film, SpongeBob and Patrick hitch a ride back to Bikini Bottom on the backside of David Hasselhoff. During the middle of their swim, SpongeBob and Patrick see the Cyclops' "bigger boot" advancing on them. The boot stops at Hasselhoff's foot and Dennis emerges from underneath it, revealing that he is still alive. He walks up to SpongeBob and Patrick, wanting to finish the job. Patrick tries to fight him, but Dennis quickly swats him aside and goes after SpongeBob, who constantly avoids him, which results in Dennis stabbing Hasselhoff in the bottom. He eventually corners him, but SpongeBob jumps to Hasselhoff's other leg, only to find Dennis there too. SpongeBob tries to bribe Dennis with Goober dollars and bubbles, the latter of which damage Dennis' eyes. Irritated, Dennis prepares to finish SpongeBob and Patrick off, having "messed around" with them enough, but as Hasselhoff passes underneath a catamaran sailboat, Dennis ends up colliding into it, saving the duo once again from him for good.

Dennis appears as the boss in two of the four boss levels in the movie game adaptation: "Name's Dennis" and "Dennis Strikes Back!"

In "Name's Dennis," he places SpongeBob on a stick and uses him to fling toilet projectiles at Patrick. Patrick can use his upgraded Star Spin attack to reflect them back at him, otherwise, he has to use the throw fruit against him. Dennis will also sic Spinners on the player, so Patrick will have to defeat them too; he can also use his upgraded Smash attack to stun them and throw them at Dennis. Once defeated, Dennis will laugh and get crushed by the Cyclops like he does in the movie.

He later appears in "Dennis Strikes Back!"; this time, SpongeBob fights him and he must use his Sponge Bowl attack to attack Dennis, as he will leap to another part of Hasselhoff's back if SpongeBob manually approaches him. Dennis will fling multiple daggers at SpongeBob, which can be reflected back with his upgraded Karate Spin. Dennis will also recruit Slammers to attack the player, so SpongeBob will have to defeat them too. Once defeated, he will try to step on SpongeBob, but gets hit by the catamaran like he does in the movie. 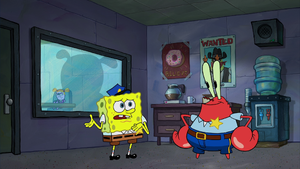 Dennis makes a cameo on a poster at the Police Station in the episode "Call the Cops."

Dennis appears in the episode "Captain Pipsqueak" as a member of E.V.I.L.; this marks his first physical appearance in the TV series.