"Ditchin'"
"Dear Vikings" is a SpongeBob SquarePants episode from season 6. In this episode, SpongeBob wants to learn about Vikings after Mr. Krabs does a promotion for them at the Krusty Krab.

Mr. Krabs creates a "Viking promotion" at the Krusty Krab by serving Regular, Large, and Viking Sized Drinks (which really are all the same size) in a bid to save the restaurant money, yet at the same time, to fool the customers into paying more money for the same size drink. He also states that whoever orders a Viking Sized cup tries on a cardboard helmet (that he found in his attic) which is also a gimmick for more money. This gets SpongeBob interested in Vikings. Squidward then teaches him about Vikings, though nothing he said was true.

The chief then sends his men to the Krusty Krab to teach them about the Vikings (which is redecorating, appropriating, and liberating), and they abduct SpongeBob and Squidward.

The Vikings bring SpongeBob and Squidward to their ship, where the captain, Gordon, introduces his crew, which all share the name, Olaf. SpongeBob asks what they do for fun (which is just throwing a shield), and one of the Vikings says they like to sing songs, even though they actually do not sing, and he then gets catapulted off the ship. The Vikings proceed to make SpongeBob the head chef, and Squidward the bathroom attendant. Soon afterward, Squidward complains about the poor lifestyle, which results in the Vikings tying him to a catapult in an effort to launch him off of their ship. Soon, the Vikings discover that they have hit a rock and that their boat will leak, which gives SpongeBob an idea. He then plugs up the boat with his porous appearance, and saves the Vikings, claiming the events to be "a Viking-sized adventure." 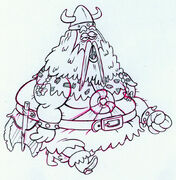 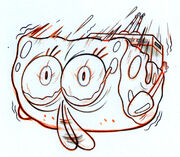 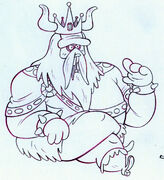