"F.U.N."
"Culture Shock" is a SpongeBob SquarePants episode from season 1. In this episode, Squidward organizes and hosts a talent show at the Krusty Krab, but refuses to let SpongeBob be part of it.

The episode opens on another day at the Krusty Krab, with Mr. Krabs manning a free salad bar, SpongeBob preoccupied with cleaning rogue dust particles off a table, and Squidward daydreaming about dancing. Mr. Krabs is getting irritated at the lack of customers when one decides to come in. Ecstatic at finally getting a customer, Mr. Krabs orders SpongeBob to cater to the fish's every whim. Unfortunately for them, the fish was only looking to get change for a dollar and is driven away by SpongeBob's excessive enthusiasm, though not before leaving a penny behind for SpongeBob. However, Mr. Krabs notices the penny and literally gets the drop on it first.

As Mr. Krabs stores the penny away in his vault, he gives his two employees the bad news: Profits are way down this month, and they need a gimmick to bring in customers. His request for ideas yields a response of apathy from Squidward and increasingly absurd ideas from SpongeBob. After Mr. Krabs points out that he was thinking along the lines of "live entertainment," Squidward hits a brainstorm: the first Krusty Krab talent show, which he would host.

He nearly blurts out his intent to make himself into a star, but quickly corrects his faux-pas by claiming it would "bring culture to this cultural wasteland we call Bikini Bottom," and that it would bring in much-needed revenue. Squidward draws in Mr. Krabs further by claiming that Pearl could become a star through this. SpongeBob is excited at the chance to show off his talents and runs off to call his parents, while Mr. Krabs gives Squidward approval to organize the show. As preparations are undertaken at the Krusty Krab for the upcoming show, SpongeBob asks Squidward when he is going to go on the show, even demonstrating his act, which consists of blowing a hippopotamus-shaped bubble, then tap dancing along with it. Unfortunately, the talent does not impress Squidward, who claims it is not "cultured" enough. SpongeBob runs off, vowing to come up with the most "cultural" performance ever.

Later that evening, the Krusty Krab is packed; among the audience are Patrick and SpongeBob's parents, the latter of whom Mr. Krabs personally introduces himself and nonchalantly admits his miserhood. Backstage, Squidward makes it very clear to everyone else that this is his own chance to reach stardom, but is interrupted by SpongeBob's newest act: inflating himself with water and showing off his spongy characteristics. Squidward once again shoots him down, not wanting SpongeBob to ruin his chances at stardom. SpongeBob tearfully begs Squidward to let him on the show, claiming he will do anything, with the cephalopod assigning him to clean up after the show is done. SpongeBob, not realizing that Squidward has assigned him custodial duties, endeavors on his new "act" with great enthusiasm.

Squidward goes on stage to introduce the audience to the first Krusty Krab Talent Show, in the process making a joke about how no one else would give the Krabby Patty a home. This greatly amuses Patrick to the point where he randomly interrupts the next parts of Squidward's speech with loud guffawing. Not able to get in a word edgewise, Squidward eventually just introduces Pearl by her name alone and leaves the stage. Pearl is unveiled with a set of cheerleader pom-poms, and Mr. Krabs is ecstatic to see his daughter in the spotlight. Her act is a cheerleading routine about the Krusty Krab, but her size and weight launch the entire audience up into the air with each jump, resulting in everyone eventually lying about in various states of pain. As she leaves the stage, SpongeBob drops into badger Squidward about his next "act," asking which direction he should mop the floor, with the latter trying to ignore him.

The next act is poetry by SpongeBob's pet snail, Gary. While the pet "speaks" in meows, at least Sandy Cheeks can understand how good his poetry is. Squidward is increasingly anxious at this point, both from how much time Gary is taking with his act and from SpongeBob bothering him again. The third act is by Mr. Krabs' business rival Plankton as "The Amazing Plankton," with him intending to make a Krabby Patty "disappear" before the audience's eyes. However, it is just another ploy to steal the Krabby Patty formula, one that Mr. Krabs puts a stop to. Plankton, vowing revenge, attempts to vanish into thin air with a magic spell, but only blows himself up and leaves the restaurant in shame as the crowd boos him.

The crowd by this point is getting fed up with the terrible acts, and Mr. Krabs storms backstage, angry at the lack of good responses. Squidward temporarily placates him by claiming he "saved the best for last." After some buildup with spotlights, Squidward appears with his dancing gear, wearing a blue swimsuit, to looks of confusion from the audience.

Squidward starts out dancing to orchestral music before the music suddenly changes into a trance-like techno beat; Squidward's dancing also becomes incredibly bizarre. Unfortunately for him, his time in the spotlight comes to an abrupt end as the audience members, completely disgusted by his talent, or lack thereof, pelt him with tomatoes from the free salad bar. Mr. Krabs, hoping to cash in on the audience's rage, quickly slaps a one-dollar price tag on the front of the free salad bar, which one audience member admits is "worth every penny" because they all hate Squidward's act more than all of the other acts put together. Squidward berates the audience for having no appreciation for his talent, only to be coldly rebuffed as the crowd says "No Talent." Furious, he storms backstage, where a waiting SpongeBob asks whether he can go on now. Squidward permits him to do so, as the show is over, much to the sponge's confusion.

SpongeBob gets to work cleaning the stage, only to receive an unexpected surprise: the audience not only interprets the cleaning as an act but appreciates it. Squidward thinks the audience has changed their mind about him and charges in as SpongeBob leaves, only to be met with silence. He storms off again, and SpongeBob continues cleaning to great applause. Squidward charges in and is once again met by silence. However, he begins to realize that SpongeBob seems to be tied to the audience's sudden change in behavior, and tries several times to get the audience to cheer for him by doing SpongeBob's act, only to be rejected and have another tomato thrown at him. Squidward is forced to conclude that it is SpongeBob the audience is cheering for and watches from the sidelines. Squidward gets praised by Mr. Krabs for organizing the event, and SpongeBob's parents for making their son a star. Mr. Krabs, lying in a wheelbarrow full of money, says he will need another one for next week's show; Squidward can only sigh and watch with sad envy as SpongeBob gets a standing ovation for his cleaning, ending the episode. 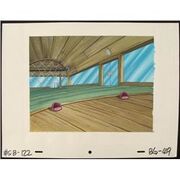 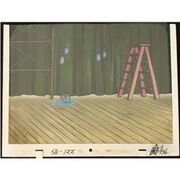 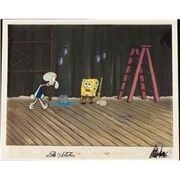 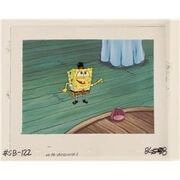 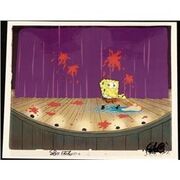 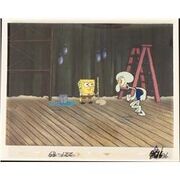 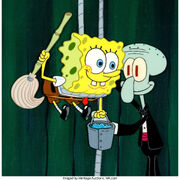 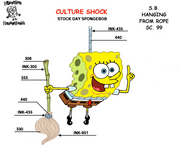 
*On The Complete 1st Season and The First 100 Episodes DVDs, "K-55" is replaced with "Aspiración" by The Langhorns while on the Amazon Prime Video version has the "K-55" music.