Creature from the Krusty Krab

There also exists a simpler version of the game for Java J2ME phones.[1]

This game stars SpongeBob SquarePants, Patrick Star, and Sheldon J. Plankton as it takes place in the dreams of the characters.

The game incorporates several different gameplay mechanics. In addition to basic 3D platforming, the game features driving and flying sequences, as well as a level where the player takes control of giant Plankton and rampage through the city. There are also several mini-games. The Wii version of the game makes extensive use of motion controls.

The Game Boy Advance version of the game is a 2D side scroller platformer with the occasional flying segments.

Diesel Dreaming (SpongeBob's Dream, Racing) - The very first level features SpongeBob. It starts with SpongeBob sleeping as he rolls over his bed and removes the blanket to reveal a hot rod. SpongeBob takes control and drives around the track for a test run. As SpongeBob praises his victory, he finds his driver's license in his pants. Plankton then rams SpongeBob, causing him to drop his license, which is carried away by the ocean currents.

With the help of Mrs. Puff, SpongeBob tracks down his license and challenges Patrick to a race. After winning (possibly), Plankton rams him again and destroys his hot rod. SpongeBob then searches for new hot rod parts and defeats a horde of thugs in his way. He then challenges Plankton and shows him who's the boss, only to be rammed again, this time, by speed-king Gary.

SpongeBob searches out for turbo drives to outfit his engine so that he can challenge Gary to a final race. SpongeBob is triumphant and is proud to be the speed-king. However, he failed to notice a pit ahead of him and accidentally drives into the pit.

Starfishman to the Rescue (Patrick's Dream) - The second level stars Patrick, who is a superhero in a comic book-like world where everyone resembles him. "Starfishman" goes in pursuit of the villainous "Dreaded Patrick." Along the way, he is repeatedly advised by a mysterious character who contacts him via phone booths. Halfway, he stops a train from ramming the mayor and finds his missing clothes.

Patrick eventually challenges Dreaded Patrick at his secret lair and defeats him in an elevator duel. However, Patrick failed to see a surprise attack coming from the minions. At the end of the level, Patrick is tied to a rocket by his foe and launched into space, where he hits an asteroid, a ring-shaped piece of which falls to Earth and traps Dreaded Patrick.

Supersized Patty (Plankton's Nightmare) - The third level that features Plankton. He grabs a crumb of a leftover Krabby Patty and zaps it with his Enlargatron Ray. The coordinates of the ray are however inaccurate and that causes the Krabby Patty to overgrow and mutate into a living patty, who then takes notice of Plankton. Plankton, however, decides to fight back with size but the inaccurate ray only makes him the height of an average citizen, not enough to dwarf the patty.

Plankton makes a run for it, carrying only his freeze ray. He is pursued by the patty through Bikini Bottom, the Industrial Park, the Jellyfish Power Plant, the Oyster Stadium, and finally through Downtown back to the Chum Bucket. Along the way, he finds a window of opportunity to collect inventory while the patty is sleeping. In the end, Plankton hides behind a coral formation and the patty passes by. However, he gloated about his victory and the patty notices his Antennas. The patty leaps and crushes Plankton.

Alaskan Belly Trouble (SpongeBob's Nightmare) - Continuing off when SpongeBob drove over the pit, he wakes up from sleeping on his bed-car. The car then flips over and SpongeBob falls off, entering a free fall through a long, narrow tunnel. He reaches the bottom of the tunnel and is eaten by an awaiting Alaskan Bull Worm. Although disgusted, SpongeBob finds the inside of the worm to be intriguing. He encounters Old Man Jenkins, who is building an airplane to escape the bowls of the worm. SpongeBob decides to help and explores the area to find a village under attack by parasites. He rescues the Chief, many of his followers, and his wife (an ironing board).

The Chief, however, finds that his wife is not "pretty-pretty" and gives it to SpongeBob so he can use it for the plane's wings. SpongeBob also rummages through a junk pile for spare parts. He then meets an inventor who is in a dilemma because his Jellyfish power cells were stolen by the same parasites. SpongeBob retrieves the cells (and witnesses the inventor's invention) and finds a propeller for the plane.

SpongeBob and Jenkins are ready to take off but their flight is delayed due to vibrations in the belly. SpongeBob heads to the rear to investigate and learns that a giant chili can is causing pain in the worm's belly. SpongeBob removes it and returns to Jenkins so they can take off. As they are flying through the worm's throat, the worm closes its mouth, and SpongeBob wonders if he can make it.

Rocket Rodeo (Patrick's Nightmare, Airborne) - Beginning from the horrible fate, Starfishman suffered after his final encounter with Dreaded Patrick, he is alive in space, still attached to the rocket. Patrick now must control the rocket while getting untied to the rocket. He flies through a black hole and finds a space station under bombardment by asteroids. After untying himself, Patrick mans the laser cannons and destroys the asteroids, obtaining lasers for his rocket.

Then Patrick advances to a level where he must destroy pillars and energy crystals to open doors out of a space ship containing aliens and astronaut Jellyfish. He then gets out but must now destroy a U.F.O. in the shape of a Krabby Patty. Things go right and Patrick returns to Earth but he doesn't know how to stop the ship and crashes into the sea.

Revenge of the Giant Plankton Monster (Giant Plankton's Dream) - Plankton is lucky to be alive. He awakes to find the giant patty sleeping beside him. As he tried to sneak away, Karen's wake-up alarm awakens the patty. Plankton sets the right coordinates for his Enlargatron Ray and makes himself monster-sized. The patty runs away, with Plankton in hot pursuit. As Plankton chases the patty, he destroys Bikini Bottom in his wake. At one point, Plankton had to find a ticket to get in the drive-in movie theater.

Plankton also removed restaurant signs, re-sculpted Mount Fishmore with his eye laser, and overloads the power grid so he can get past the barriers. He finds the patty hiding in skyscrapers and destroys each floor to force the patty out. Meanwhile, at the end of the level, the Alaskan Bull Worm watches the carnage unfold until SpongeBob and Jenkins force their way through the worm's teeth. SpongeBob finds Plankton giant and the patty that was captured escapes his clutches and clings onto SpongeBob's plane. Enraged, Plankton pursues SpongeBob.

It Came from Bikini Bottom (SpongeBob's Dream, Airborne) - SpongeBob tries to avoid Plankton while coming up with a way to defeat him. He flies through the city and hides in the sewers to confuse Plankton. Plankton gets furious and chases SpongeBob in hot pursuit. SpongeBob then engages Plankton in a construction site and shoots down targets to drop heavy loads on Plankton's head. SpongeBob then goes on to mining caves. Plankton is starting to get mad. Plankton continues to pursue SpongeBob.

After a long pursuit through the city, SpongeBob engages Plankton again on a radio tower. SpongeBob destroys the support bolts to make the tower unstable, causing Plankton to fall on his rear. As Plankton aches in pain, SpongeBob feels sorry for him and decides to give him a hand. That was a trap and Plankton captures SpongeBob.

Rooftop Rumble (Patrick's Dream) - This level is the second-to-last level. Starfishman arrives from his last story and falls on the rooftops to find Mermaid Man. They team up and now he needs to battle Giant Plankton to help SpongeBob. In the first round, he must avoid his subjects and the cars that Plankton throws at him. Then, he must avoid Plankton's atomic eye by throwing rocks at him, opening up TV dishes, and hiding behind them. After that, he must get recruits from the military by finding a way to turn army searchlights.

Next, he needs to find a way to squish Plankton's hands by attacking his subjects, making Plankton shoot lasers at him to reveal buttons, and pushing all the buttons to stop both of his grips on the building. Finally, he needs to catch up with a shrink ray to shrink Plankton. When he shrinks Plankton, they enter a dream bubble and meet a doctor with a Krabby Patty for a head.

Hypnotic Highway (All Nightmare, Racing, Airborne (Patrick only)) - The doctor explains that the reason why they're having the dreams is that they all ate a Krabby Patty before they fell asleep, saying that the particular chemical composition of the patties affected their biorhythms and caused a reaction that resulted in the dreams, this is what caused it. SpongeBob then asks why he knows so much about Krabby Patties, and the patty responds, "Is it not obvious?!?!" and strips his outfit off to reveal that he is that Krabby Patty. He then runs away and turns into a trophy.

SpongeBob, Patrick, and Plankton chase after him and head into the final level, here they all race in a strange dream to get out of their dream and catch the patty, in which they argue about whose dream it is. If all the sleepy seeds for a person have been collected, the player can access that person at this level.

SpongeBob is the only playable character that can be played if you do not have all of the seeds for either Plankton or Patrick.

After the credits, Gary wakes up to find SpongeBob pretending to drive to work, a reference to Diesel Dreaming. Gary takes a walk around town. He sees Patrick riding a mechanical horse in a way that a blanket on a clothesline in the background makes him look like a superhero, reminding him of the Rocket Rodeo level. Gary passes by the Chum Bucket to find Plankton searching for the Krabby Patty crumb. The way he storms the table filled with boxes reminds Gary of the Revenge of the Giant Plankton Monster level.

When Gary comes home SpongeBob brings home a Krabby Patty and says that Gary shouldn't eat it before bed or it might give him nightmares, teasing him with it. He then walks into the kitchen and Gary sees him eating the Krabby Patty. Gary sees it moves its mouth, then the Alaskan Bull Worm rushes through and eats SpongeBob, causing him to drop the patty, and Gary goes to sleep.

There are five normal items you could find in this game, these include:

Some characters from the TV show appear at varying points during the game either physically or just referenced. Some of these characters are the following:

Characters not in the show

The game has been referred to, by Nintendo Power as being the "most ambitious and most successful SpongeBob game to date," in their December 2006 issue. Further to that, the game has received generally positive reviews. The following ratings have been released for the game:

Key points brought out in the above reviews include:

And key flaws brought out in the reviews include:

The game was also nominated for an Annie Award for the best-animated video game in 2006.[3] It was nominated and won for the "Favorite Video Game" award at the 2007 Kids' Choice Awards. This makes it the second SpongeBob video game to be in the award show, with Battle for Bikini Bottom in 2004 appearing beforehand. 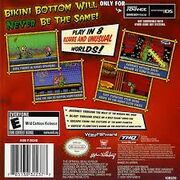 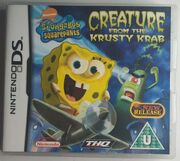 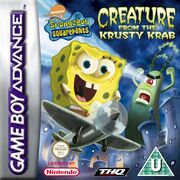 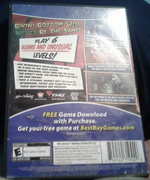 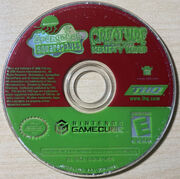 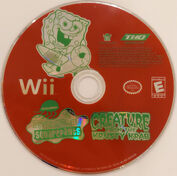 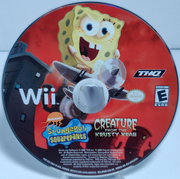 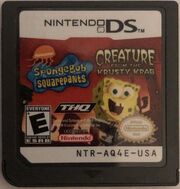 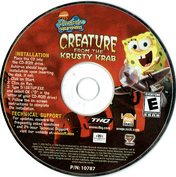 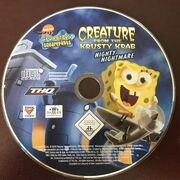 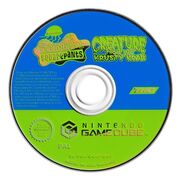 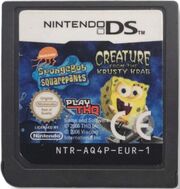 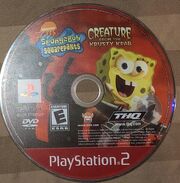