"My Pretty Seahorse"
"Club SpongeBob" is a SpongeBob SquarePants episode from Season 3. In this episode, SpongeBob, Patrick, and Squidward are flung into and stranded in the Kelp Forest.

The episode begins with Squidward leaving his house and riding his bicycle to work. He then rides past a tall tree, at the top of which is a tree house where SpongeBob and Patrick are sitting and giggling profusely. They see Squidward below and talk to each other about him, beginning certain words with "w." Squidward approaches the base of the tree and asks in perturbation if this manner of speaking is some kind of stupid code, and SpongeBob tells Squidward that he cannot tell him because he is not a member of their club. Squidward mocks them, saying that he is more than qualified to join their club. SpongeBob tells Squidward he could not fit in even if he tried. Squidward tells them that he is "a member of over 20 different exclusive clubs all across the sea bottom," but SpongeBob and Patrick continue to insist that he would not fit in. Enraged, Squidward tells them they know nothing of "fitting in" before he proceeds to climb the tree. SpongeBob and Patrick frantically tell Squidward to stop, but he does not.

Squidward crawls into their tree house, and SpongeBob and Patrick explain that they meant that he literally could not "fit in," and that they have been stuck up there for three days. SpongeBob and Patrick begin Squidward's initiation into their "club," but Squidward stops them, and attempts to get out by pulling on a smaller tree. He manages to make the tree double over and is about to crawl out when the second tree snaps, launching the tree house (with its three occupants) into the sky. They fly over the Kelp Forest, where a couple sees them, the man believing the tree house to be a shooting star.

Even more time passes, and by now, Squidward has dismantled the box to build a shelter. He has a hat made out of some dried plant, has grown a five-o'clock shadow, and is sitting by a small campfire. A small bug scurries past, and Squidward catches it and proceeds to cook it. He taunts SpongeBob and Patrick with his "food," saying that they could have sided with him and survived, but instead listened to a talking shell. He proceeds to say while chuckling, "As if the answers to all your problems will fall right out of the sky!"

Above the forest, a damaged plane is serendipitously falling right out of the sky, and the pilots drop their load of picnic supplies and food to avoid crashing. The equipment lands around SpongeBob and Patrick, who emerge from their state of doing nothing to praise the magic conch. Squidward is extremely shocked, and he walks over to the two, who are devouring a table full of food. Squidward says he was only kidding earlier, and asks if he is still a member of the club, and SpongeBob tells him that he is still a member. Squidward cannot decide what to choose, and begrudgingly follows SpongeBob's suggestion of asking the conch shell. Squidward asks the conch permission to eat certain specific food items, which it denies. He repeatedly asks it permission to eat anything, which it denies every time. Squidward becomes enraged when the conch denies permission in a mocking tone, and is about to go insane when a Park Ranger enters the clearing.

Squidward tells him he has been stranded with SpongeBob, Patrick, and the magic conch shell for weeks, and his mention of the "magic conch shell" prompts the ranger to pull out an identical conch, revealing himself to also be cultishly obedient to the conch, much to Squidward's exasperated dismay. SpongeBob and Patrick are delighted to meet a "club member," and the ranger tells them that his conch advised him to look for them. The three club members praise the magic conch before asking it how to get out of the kelp forest. It again tells them, "Nothing." Following the conch's advice, they do nothing and assume sitting positions on the ground (until someone else comes and rescues them). Squidward, at the end of his sanity, praises the magic conch and sits down as well, as the episode ends. 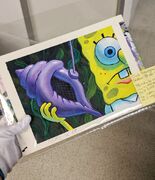