The book was reprinted in 2007 as the fifth book in the Bikini Bottom Bounty series.

"Oh, no! Mrs. Puff is out sick, and a substitute teacher has taken her place! How will SpongeBob cope? Find out in his comical classroom caper!"

SpongeBob accidentally crashes his boat during an exam with Mrs. Puff, yet again failing his boating test. Mrs. Puff, worn out, decides to fake a sick day.

The class completes the test and (after SpongeBob tries to explain to the substitute how Mrs. Puff usually runs her class) the substitute begins reading out a list of students who Mrs. Puff wants to stay behind after class for extra help, which solely consists of SpongeBob (who the substitute of course thinks is Horace). Horace looks over at SpongeBob and winks, and SpongeBob walks home in tears. SpongeBob explains the situation to Patrick, who reassures him that Mrs. Puff will be back the next day and SpongeBob will be "failing another boating test before you know it". Sure enough, Mrs. Puff is indeed back the next day, making SpongeBob feel very relieved. However, Mrs. Puff realizes that the substitute teacher gave the entire class the final written exam by mistake, and sent Horace (thinking he was SpongeBob) to retake his boating exam instead of giving him extra help after class. Mrs. Puff also realizes that Horace (under SpongeBob's name) passed said boating exam, and thus SpongeBob has finally passed boating school, horrifying Mrs. Puff.

SpongeBob excitedly runs home, yelling to everyone that he passed his boating test, but becomes incredibly sad upon the realization that he will never see Mrs. Puff again. The next day, a small crowd gathers to watch SpongeBob drive by himself for the first time. SpongeBob tearfully says his final goodbyes to Mrs. Puff before driving off as Mrs. Puff vows to move far away, not wanting to be on the same road as SpongeBob. A few seconds later, SpongeBob is stopped by a pair of police officers for not stopping at a stop sign and is asked to show them his license. SpongeBob complies and the police officers realize that while SpongeBob passed the driving portion of the exam, he still has yet to pass the written exam. SpongeBob is overjoyed and leaps out of his boat and into Mrs. Puff's arms, realizing that he has to go back to boating school. Mrs. Puff realizes that she'll still be teaching SpongeBob for a long time and moans that she needs a vacation. 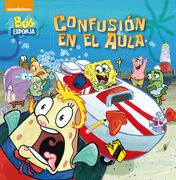