1999 - present
Clarence John[1] "Clancy" Brown III (born January 5, 1959; age 63) is an American actor and voice actor. He is a main cast member for the SpongeBob SquarePants franchise, voicing Mr. Krabs. Outside of the series, Brown is well-known for his roles as Captain Byron Hadley in The Shawshank Redemption, the Kurgan in Highlander, and Lex Luthor in various DC-affiliated projects.

Brown was born on January 5, 1959, in Urbana, Ohio,[2] and had an older sister, Beth (c.1957–1964).[3] His mother, Joyce Helen (Eldridge), was a conductor, composer and concert pianist. His father, Clarence J. "Bud" Brown, Jr., was a newspaper publisher who helped manage the Brown Publishing Company, the family-owned newspaper business started by Clancy's grandfather, Congressman Clarence J. Brown. From 1965-1983, Bud Brown also served as a congressman, and later as Chairman of the Board of Brown Publishing. The family operated the business until 2010. 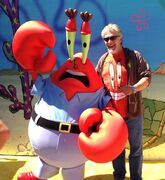