Chuck is a submarine-like flying robot with lime-green eyes. A glove sticks out from the top, which is used to throw water missiles.

In Rehydrated, Chucks have darker colors, appear more round, and sport new expressive eyebrows. Like other robots, its eyes are green when not attacking and red when attacking.

Chucks are fairly common in the game, appearing in many levels: Downtown Bikini Bottom, Rock Bottom, the Mermalair, Sand Mountain, the Flying Dutchman's Graveyard, and the Chum Bucket Lab inside SpongeBot SteelPants. They also appear in the Bikini Bottom hub in the Krusty Krab.

Chucks usually appear floating over bottomless pits or out-of-reach platforms, making it dangerous for players to approach them for a direct attack. Like Tar-Tars, Chucks can attack from a large distance. Their missiles do not follow the player but Chucks can aim very accurately. Even if the missile does not directly hit the player, the resulting water splash can still harm the player and even push them to a dangerous area.

In situations where it is too dangerous to directly attack a Chuck, the player can use distance attacks such as Sandy's lasso, Patrick throwing a Throw Fruit, or SpongeBob's Cruise Bubble. Chucks drop 50 shiny objects when destroyed.

Concept art with Chuck from the original Battle for Bikini Bottom

Concept art with Chuck from Battle for Bikini Bottom: Rehydrated 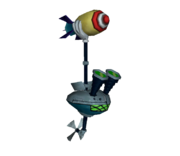