View source
If you were looking for the article about the DVD, then see Christmas Who? (DVD).

"Survival of the Idiots"
"Christmas Who?" is a SpongeBob SquarePants episode from season 2. In this episode, after not knowing what Christmas is, Sandy tells SpongeBob about the holiday's traditions, and the latter spreads it around Bikini Bottom to celebrate their first Christmas.

As the special opens, it is almost Christmas in Encino, California, and Patchy the Pirate, president of the SpongeBob SquarePants fan club, is deep in preparations for the holiday. With the help of his unenthusiastic assistant, Potty the Parrot, Patchy sets pictures of SpongeBob and Patrick on the mantelpiece, puts up his various SpongeBob-themed ornaments, and bakes Christmas cookies, the dough of which Potty eats. Patchy also takes time to open a letter from a fan, who asks if SpongeBob likes Christmas as much as he does. Patchy remarks that there was once a time when Christmas in Bikini Bottom was unheard of, and decides to tell the tale.

Outside Sandy's treedome, SpongeBob is dressed in his karate gear and preparing to give Sandy a surprise sneak attack. Inside, Sandy is putting up Christmas lights, which SpongeBob mistakes for fire and tries to put it out with sea water. After recovering from the drenching, Sandy is shocked to find out that SpongeBob has never heard of Christmas, and tells him all about it.

Later at the Krusty Krab, SpongeBob passes the story of Christmas on to Patrick, Squidward, and Mr. Krabs. Everyone in Bikini Bottom, except Squidward, is excited at the idea of Santa Claus bearing gifts, and they all, except Squidward, put their Christmas letters into glass bottles, which are then shot up to the surface for Santa to receive as the act ends. The Bikini Bottomites decorates for Christmas as SpongeBob and Patrick sings a song. They even decorate Squidward's house which Squidward does not agree with. After the song, Squidward closes his blinds.

Act 2 begins as SpongeBob is sending the last of the letters to Santa, and finds out Squidward still has not written his letter yet. SpongeBob and a few citizens try to get him to write a letter and be in the Christmas spirit, but it fails. In the days leading up to Christmas, the people of Bikini Bottom heartily celebrate, and on Christmas Eve, they stand in front of the large decorated coral tree and sing, eagerly awaiting the arrival of Santa. Squidward, refusing to believe in Santa Claus, takes no part in any of the mirths.

The people continue to sing until morning, when they realize that Santa has not come. Everyone leaves in disappointment, and they call SpongeBob out on his lying. Patrick tries to tell the people that Santa had stopped for a snack and so SpongeBob and Patrick are waiting for Santa, until they realize that he really does not exist, SpongeBob becomes heartbroken. In realty, Santa didn't come because they were supposed to be asleep. Squidward wakes and comes out, at last, laughing at SpongeBob's humiliation, and even takes a photo to commemorate the occasion.

As SpongeBob sadly trudges away, he hands Squidward a present. Squidward, still skeptical, opens it to find a hand-carved driftwood clarinet. Squidward sees how SpongeBob has only been trying to spread joy, he feels very remorseful for what he did, and decides to make up for his rudeness. He dresses up as Santa and surprises SpongeBob, who thanks him for bringing Christmas to Bikini Bottom.

Squidward prepares to go back inside his house but is approached by a little girl, asking him for a present. Out of desperation, Squidward gives the child a large wrench, which pleases her greatly. A large crowd arrives asking for presents, and he ends up giving away everything he owns. Squidward realizes the lengths he has gone to in preserving SpongeBob's dream, and after shooing away an excited SpongeBob, he discovers a note on his doorstep, which turns out to be a message from Santa thanking him for his help. He looks up in time to see the real Santa Claus soaring overhead in his sleigh, as he is shocked that he was wrong about his existence. At a loss at seeing Santa, he dismisses himself as being insane and plays his new clarinet before going back inside.

After finishing his story, Patchy has to deal with Potty perching on his head. However, it turns out the parrot merely lays him a gift of goodwill, which touches Patchy's heart. Patchy then proceeds to step under the mistletoe, inviting the ladies to come by for a smooch, only for Potty to start swooping after him. With Patchy preoccupied, the narrator rounds things off by wishing a "Good night, and Happy Holidays," to end the special.

SpongeBob saying "Lookey who's next!" 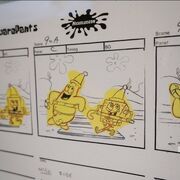 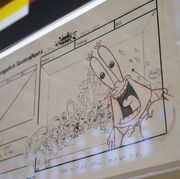 Animated GIF of the storyboard