Chomp-Bot is a very small, dog-like robot with razor-sharp teeth. They contain poisonous gas in their bodies.

Their main method of attack is to chase the player and try to bite them. However, they can sometimes breathe toxic gas on the player as well. Like most of the robots in the game, Chomp-Bots can be defeated in one hit, dropping 10 shiny objects each. They tend to appear in small groups. 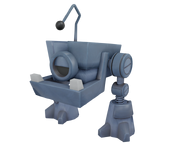 bfbb rehydrated design
Add a photo to this gallery
Retrieved from "https://spongebob.fandom.com/wiki/Chomp-Bot?oldid=3028360"
Community content is available under CC-BY-SA unless otherwise noted.