"Krusty Krushers"
"Choir Boys" is a SpongeBob SquarePants episode from season 6. In this episode, SpongeBob wants to join the choir that Squidward participates in.

The episode begins with Squidward getting ready for an audition at the Bikini Bottom Men's Choir. When he goes out of his house, he stumbles upon SpongeBob, bored and on the ground as Patrick has gone away for a family reunion. He asks Squidward where he is going, and after a while of asking, he finally says he is going to the Men's Choir.

Squidward rides his bike away, but SpongeBob follows him as he wants to show him his song. When he does not want to listen, SpongeBob digs a pothole, causing Squidward to fall off his bike and land at Jellyfish Fields. He gets trapped in jellyfish while SpongeBob takes advantage of him being captive and sings his song.

When Squidward gets back to his bike with many jellyfish stings on him, he takes a shortcut through the kelp. However, he is stopped by SpongeBob, who is disguised as a singing traffic cop. He tries to sing his song, but Squidward finds out he is in disguise and ties him to a piece of coral. Soon after, SpongeBob begins singing his song, and the jellyfish hear him. They follow the singing source, and SpongeBob falls from the coral. The jellyfish, buzzing happily, carry him to the choir.

Squidward finally reaches the choir, but when he sings with the choir, he clears his throat for a long period of time and sounds terrible when he finally sings. Soon after, SpongeBob comes inside the building while being carried by jellyfish and singing his song. After he finishes, everyone but Squidward applauds him. He is let into the choir, and makes Squidward his page turner during concerts while the episode finishes. 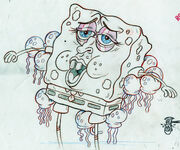