"Mermaid Man and Barnacle Boy V"
"Chocolate with Nuts" is a SpongeBob SquarePants episode from season 3. In this episode, SpongeBob and Patrick read Squidward's fancy magazine and want to become entrepreneurs, so they proceed to sell chocolate bars which doesn't go as planned.

One day, SpongeBob finds a magazine called Fancy Living Digest in his mail, which depicts the fancy lifestyles of the extremely wealthy. Squidward shows up and takes the magazine, which was actually meant for him, and SpongeBob and Patrick ask him how the people in that magazine can get so rich. Squidward simply answers that they are entrepreneurs and sell items and then leaves, ordering SpongeBob to stay away from his mail. SpongeBob and Patrick, wanting to also become entrepreneurs, decide to sell chocolate bars to raise money in hopes of achieving the fancy lifestyle.

However, no one initially wants to buy any chocolate bars. The first person they visit, Incidental 6, goes berserk upon hearing the word "chocolate," and begins chasing them while madly screaming "CHOCOLATE!" He stalks them throughout the episode, appearing and causing them to run away from him at several points. At the next house they visit, SpongeBob and Patrick are convinced to purchase candy bar carrying bags by a con artist. He later scams them again, selling them "candy bar bag carrying bags." The next person is Incidental 49, but SpongeBob has trouble finding her a candy bar amidst all of his bags and she impatiently slams the door in their faces.

After running away from Tom again, they sit in the diner and think about a new approach. Patrick suggests "Let's get naked," but SpongeBob says they should save that strategy for when they are going to sell real estate. They remember how the con artist convinced them to buy the candy bar bags by "complimenting" them, not realizing what the man meant when he said they were mediocre salesmen, and decide to try being nicer to the customers. Patrick says "I love you" to the first customer they try this on, but he slams the door immediately. They try again, but the customer refuses to buy chocolate since it resulted in him suffering from childhood obesity. He shows them a picture as proof, which Patrick buys. SpongeBob figures that they are too easily distracted and need to stay focused on selling. Patrick takes this too literally and freaks out their next customer by focusing on him with his eyes.

Eventually, after seeing an advertisement for Barnacle Chips, SpongeBob and Patrick decide to increase the appeal of their product by "stretching" the truth. The first customers they use this tactic on are Incidental 87, an old lady, and her very old mother. The mother is so old that she is only a shriveled up spine. They claim that the chocolate will make one immortal by rubbing it on their skin, which the extremely old mother is delighted by to her daughter's dismay. The duo continues this strategy, making several absurd promises about the chocolate. Their lies culminate in them dressing in bandages and pretending to be badly injured and in need of an operation. However, the customer they go to is himself in far worse shape than they claim to be, and must sell chocolate to pay his medical bills. Feeling extreme sympathy for the man, SpongeBob and Patrick buy a huge amount of chocolate from him with all of the money they had just made. However, the man is then revealed to be the same con artist who had scammed them twice before.

SpongeBob and Patrick, unaware that they have been swindled for the third time, despair since they do not have anyone else to sell chocolate to and decide to give up. Suddenly, Incidental 6 catches up with them again. He approaches them menacingly, but then cheerfully requests to buy all of the chocolate, which leaves SpongeBob and Patrick speechless. SpongeBob and Patrick make a fortune from him, which they use to rent out a fancy restaurant on a double date with Mary and her mother, much to Squidward's shock and disappointment. 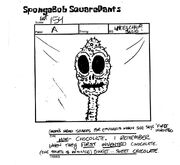 "A very sick episode, masterminded by the underground cartoonist KAZ. You can spend hours theorizing about what these eleven minutes says about truth, lies, Big Business, entrepreneurship, and consumerism. All that, plus that creepy old lady who's basically just a head and a spinal cord. Eeeyeu!"

SpongeBob - Chocolate with Nuts in 5 Minutes

Why "Chocolate With Nuts" is so RICH 🍫🤑 - SpongeBob

Why "Chocolate with Nuts" is a LEGENDARY Episode 🍫 - SpongeBob

If SpongeBob Was... Different? 🍫 - SpongeBob- Reimagined