Encyclopedia SpongeBobia
Register
Don't have an account?
Sign In
Advertisement
in: Objects, Characters, Characters with one appearance,
and 7 more
English

Chip Plankton II is the son of Plankton and Karen. He appears in the episode "Karen's Baby."

He is a small silver calculator with green eyes and a light pink baby bonnet. He eventually grows chubby baby-like arms and legs in this form. He then wears a diaper with a pink safety pin.

He is a small handheld payment terminal with skinny arms and legs and green eyes. He also has paper sticking out of his head.

He has the appearance of a handheld game console, similar to the PlayStation Portable. He has a skinny body with skinny arms and legs, a green mouth and eyes on his screen, and wears a backwards red baseball cap with neon green sneakers on his feet.

He is a mobile computer that looks a lot like his mother Karen. He carries an orange backpack and has a green mouth and eyes on his screen.

He is a fully grown ATM that wears a red necktie and a name tag. He also still has the same green eyes as when he was younger.

Karen orders a robot to be her and Plankton's child, much to the shock of Plankton. He tries to prevent a stork drone from delivering the baby to the Chum Bucket, but fails, and the baby is safely delivered. Karen names the baby Chip after her grandfather, while Plankton shuns the baby.

Chip soon learns to walk and eventually upgrades into a kid, so Karen takes Chip to the Fun Arcade for some entertainment. Chip goes inside one of the arcade cabinets and plays the game, though Karen gets him out when the game gets too dangerous. This causes Chip to upgrade into a rebellious teenager, who screeches static at Karen, shocking her and making her drag Chip back to the Chum Bucket.

Karen puts Chip under Plankton's care as she calms down. Plankton speaks with Chip, who tells his father what happened at the arcade. Plankton suggests that Chip runs away from home, so Chip does so. Karen notices Chip's absence as Plankton reveals Chip ran away at his advice, causing Karen to threaten Plankton and force him to find Chip.

Chip, now living in an alley, meets a group of robots who urge him to join their gang. However, Chip discovers that the gang dismantle other robots and use their parts for themselves, so he tries to run away, but is caught. As they prepare to take his parts, he sends a distress signal to Plankton, who finally becomes concerned for Chip and arrives to save his son, but is quickly overwhelmed by the robots. Chip, upon seeing his father in danger, speaks for the first time and rewires an ice cream machine and uses it to destroy the robots and save Plankton. This act earns him Plankton's full acceptance.

Chip and Plankton return to the Chum Bucket and Karen is happy to have Chip back. Plankton brags about Chip, who suddenly upgrades into a young adult, and decides to go to college and bids his parents farewell. Eight semesters later, Chip's parents secretly watch his first day at work as an ATM at First Nautical Bank, and see how he taunts their enemy Mr. Krabs by refusing to give him money. Plankton and Karen laugh at Chip's action and express their pride in him. 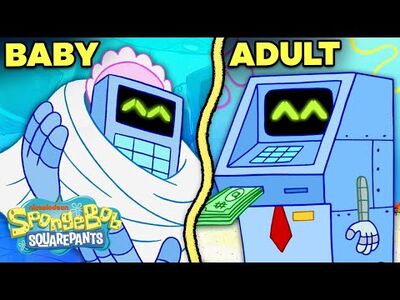