"Cave Dwelling Sponge" is a SpongeBob SquarePants episode from season eleven. In this episode, when a prehistoric Sponge is unfrozen, he causes chaos all over town – and only SpongeBob can communicate with him.

The episode begins with SpongeBob walking barefoot with Patrick, out on a nature walk into the forest. SpongeBob then decides to go explore a nearby ice cave. Inside the cave, Patrick gets his tongue stuck on the ice. SpongeBob uses hot chocolate to melt the ice, and Patrick's tongue is burnt and freed. Patrick passes out and the hot chocolate melts all the ice and Spongy Spongy emerges from it. He then follows SpongeBob, fascinated by the squeak of his shoes. He then hides in SpongeBob's bag for the rest of his trip.

SpongeBob then arrives back home and leaves Patrick next to his rock with his tongue tied on a rack. SpongeBob then goes home to find Gary waiting for him. He leaves the heavy bag on a peg and Spongy Spongy jumps out. He is curious about Gary and then follows SpongeBob around his house and into the bathroom in which he jumps into the sink. SpongeBob mistakes the cave sponge for a mirror of himself. SpongeBob goes to a special room in which he gets dressed and Spongy follows. Spongy also gets dressed like SpongeBob by the machine but the shoes don't seem to fit him, which makes him sad. He follows SpongeBob out of his house and into the streets of Bikini Bottom.

Spongy continues to follow SpongeBob, and attempts to mimic SpongeBob's movements, but causes destruction instead. He then follows SpongeBob into The Krusty Krab kitchen, then freaks out over the sound of the blender and gets on the hanger with the pots and pans.

Mr. Krabs then calls SpongeBob to go out of the kitchen and into the dining room. Multiple people accuse SpongeBob of breaking their stuff, leading to his arrest. SpongeBob tries to explain that he was framed, but the police don't listen. He then gets taken away to jail. Mr. Krabs says that he is going to visit SpongeBob in jail and leaves Squidward in charge of the cooking.

The police officer takes SpongeBob to see Mr. Krabs. SpongeBob is tapping his shoe as Spongy Spongy hears it and breaks the fence. SpongeBob talks to his boss and frantically tells him he didn't do anything, as Mr. Krabs isn't buying his employee's story but wants to help him. He tells SpongeBob to just confess, since nobody else in town looks like him, before Spongy Spongy promptly breaks through the wall and the shocked Mr. Krabs sees SpongeBob was actually telling the truth and Spongy Spongy was really the culprit of the destruction. The two watch cave sponge breaks the glass in the room and it lands on Mr. Krabs. Perch Perkins appears out of nowhere and reports that the fry cook is actually Spongy Spongy and declares that Spongy Spongy is a cave sponge that was really the cause of the destruction. Spongy Spongy beats up the scared Officer Rob Johnson then licks his head before running off. SpongeBob states that he was innocent and realizes that Spongy Spongy is just lost and scared and he just needs another sponge to talk to. Perch Perkins reports that Mr. Krabs and SpongeBob go to city hall, something that worries Mr. Krabs.

The episode name was confirmed in a tweet by Vincent Waller on December 12, 2016. In the tweet, he also confirmed that Doug Lawrence wrote the episode.[1] 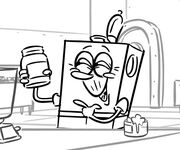