1999 - present
Carolyn Lawrence (born February 13, 1967; age 55) is an American actor and voice actor. She is a main cast member for the SpongeBob SquarePants franchise, voicing Sandy Cheeks. She has also voiced other Nickelodeon characters, like Cindy Vortex in Jimmy Neutron: Boy Genius and Mandragora in Winx Club.

She has also voiced other Nickelodeon characters, like Cindy Vortex in the Jimmy Neutron: Boy Genius franchise and Mandragora in Winx Club. She has also had minor roles in a few other cartoons, movies, and video games. One of the video game voice roles she is known for is the voice of Ashley Graham in Resident Evil 4. 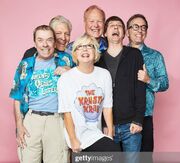 Carolyn Lawrence (left) with the other Gal Pals voice actors