Calls in the Wild

Calls in the Wild is the first comic strip in the SpongeBob Comics No. 9.

It starts off with SpongeBob telling a scary story around the Troop 76 campfire to the fish children about the Mulligor letting out his deadly call and telling the kids that is the last they ever saw of Troop 75. He calls them tor their tents to sleep and Patrick thinks that the Mulligor is in the woods. He says that is not real and is just a scary story for children. Patrick goes under his rock tent and the rest go to sleep.

Meanwhile, Squidward is relaxing outside at night and is happy that he is not bothering him. He plays a clarinet serenade for the moon, or has he calls it, Lunar Lovely. He plays his clarinet and as expected he plays it horribly and the clarinet makes the Mulligor howl. Squidward thinks the reed is out and he wonder if he has any any spares. The campers and the employees peek out their tents. The campers and employees - the latter of whom being SpongeBob and Patrick - head out of their tents. SpongeBob, Patrick, and the fish children heard the howl. They think it is the Mulligor's howl. He asks if Patrick heard it which he confirms.

Squidward continues to play his clarinet still sounding like the howl. The employees attack him with a net from above and they still think it is the Mulligor. They think it is a real live Mulligor. Squidward shouts at them for catching him with a net. He pops out of the net and the apologize. 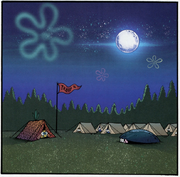 Add a photo to this gallery
Retrieved from "https://spongebob.fandom.com/wiki/Calls_in_the_Wild?oldid=2631711"
Community content is available under CC-BY-SA unless otherwise noted.