"In Search of Camp Noodist"
"Cabin of Curiosities" is a Kamp Koral: SpongeBob's Under Years episode from season 1. In this episode, a mysterious cabin of odd campers have frightful fun with SpongeBob and Patrick after dark.

The episode starts with SpongeBob and Patrick saying "ready," then yelling, as they swing from a vine and crash into each other. They do it again, and then crash into Squidward, making him flat and breaking him like a puzzle, and SpongeBob and Patrick reconstruct him. Squidward asks them what are they doing. SpongeBob tells him that they are trying to earn their "Danger" badge. Squidward flicks a piece of chewed gum off the page and it is revealed to be the "ranger" badge, not the "danger" badge, and SpongeBob inhales the book into his mouth. Patrick asks if Squidward has a ranger badge, and he said he tried for one once. In a flashback, his eyes move rapidly, while different sounds are heard, and he says to never go for a ranger badge. He says that they could do something easy, and presses SpongeBob's nose to release the book. He says the "playing dead" badge, but they say no, so he says the "going home" badge, which they refuse, so Squidward says the "making friends" badge, and to get it, they need four signatures, so they ask Squidward to be their friend, but he disappears quickly. SpongeBob and Patrick ask each other to be their friends, but SpongeBob says that it cannot count since they are already friends. He then says that there are lots of potential friends at the camp, and Patrick agrees, but he says if SpongeBob gets in his way, he will destroy him.

SpongeBob and Patrick head towards the Yacht cabin, with Lady Upturn and the other campers. Lady Upturn tells them that deliveries are in the back. SpongeBob and Patrick ask them to be their friends, so Lady Upturn asks how much it will be. Rea offers $1,000, and Roh offers $2,000. Patrick asks if he hears three, so Lady Upturn gives $3,000 and all the jewelry she is wearing. SpongeBob asks for them to stop because he says that their friendship is free. Rea says she is going to be sick, and Lady Upturn asks them to leave before they "catch" what the "beggars" have. After they leave, Mr. Krabs jumps into the pile of gems and money and tells them that he will be their friend, but Lady Upturn says no, so she explodes the gems and money, and reveals Mr. Krabs' digital Wireframe.

SpongeBob and Patrick go to the jocks' cabin, as they exercise. SpongeBob asks them if they can be their friends, and Larry says sure, if they do a single chin-up. They are seen struggling for some time, and after nine hours, SpongeBob and Patrick's arms are fully extended from the bar to the ground. Larry says that the gym is closed, and that they will need more luck next time. They start playing with their long arms and then jump from lightning that comes from the grass, and find a scary-looking cabin. SpongeBob says that it is called the "trawler cabin," or the "weirdo cabin." They knock on the door, but it opens eerily. They look inside, scared. As they look around, they see a little fish-like creature floating. She says that they have to be very brave to enter the cabin, but then, an pink anglerfish shows up, and says they have to be very foolish to enter. Patrick jumps into SpongeBob's arms as they say that they are foolish.

They introduce themselves as Roxy, and introduce a pink blobfish named Jimmy. He tells SpongeBob to shake, and SpongeBob says that they are. When he lets go, he has some slime with him, and Jimmy says that it tastes like maple syrup, so Patrick licks SpongeBob's hand. They back away, but Patrick gets stuck in a spider web after. A spider comes out, and says that her name is Preda Tory as she gets Patrick out of the web. He asks if she does free alterations. They back around and ask who the cabin counselor is. Preda Tory calls out a "kid" and a sleeping bag comes out, which reveals to have Kidferatu in it. SpongeBob yells so much that he shrinks, so Patrick blows on him and he regrows. As they leave saying that it is past their bedtime, they notice badges on the wall, and asks the group how they got them. Roxy says that they got them from doing night camp activities. SpongeBob and Patrick say that they want night badges, and Preda Tory say that they are in luck, so that they can help them, as they laugh nervously.

Outside by the camp lake, Jimmy says that the first activity is Swamp Ape Fishing. SpongeBob is surprised because there is a swamp ape in the lake they all swim in while Patrick puts bananas on a fishing rod. So Preda Tory says that there are many more things in the lake other than kids. Patrick says he got one, and it is big. Patrick is then pulled into the lake as SpongeBob follows him. They get sucked into the lake, and an ape comes out of the lake and pulls SpongeBob and Patrick towards him, and puts them back on land. Mini Roxy says congratulations, and that they earned the badge. SpongeBob says he got what the challenge was about, the ape fishes for them, and Kidferatu gives them their badges. They get scared again, and then jump in excitement for their badges.

Jimmy says that the next activity is Nocturnal jelly milking. Jimmy gives SpongeBob and Patrick a jar, and he says to them that they need to fill the jar with jam and the badge is theirs. Patrick gets a jellyfish and SpongeBob starts getting the jam into the jar. Jimmy says that the "puny" jellyfish will not work, so he recommends a jellyfish above them. However, it is much bigger than them, and they get eaten as it leaves. Roxy asks what is more effective, horror or terror. Jimmy says that he likes revoltion. Preda Tory says that she is particularly towards dread. The big jellyfish comes back and spits SpongeBob and Patrick back out, as it gives them a jar full of jam. For the last activity of the night, SpongeBob thinks that a horrible monster will catch them or eat them, but the last task is actually playing the game of "sardines," in which one person hides, and when someone finds them, they hide with them, and the finder hides, and it repeats until the last person finds them all. Jimmy says that Kidferatu will hide, as the rest seek.

An outhouse is shown as Patrick passes by it. He opens the door, finds Kidferatu, and hides with him. His eyes turn yellow and acts like he is going to bite SpongeBob, then Preda Tory finds them. Preda Tory's eyes turns red with Kidferatu looking like they are going to bite him, then Roxy enters and her eyes turn green, and Jimmy does the same thing, but his eyes do not turn a color. Patrick is outside and opens the outhouse's door and they are all on top of SpongeBob, while SpongeBob has fake teeth on him, and everyone takes them away quickly. Roxy says that since Patrick is the loser, he is the winner, and gives them a badge. As the sunrise appears in the sky, Roxy, Jimmy, Preda Tory, and Kidferatu disappear, and as SpongeBob and Patrick look back, they are not there anymore, and both are sad.

They go to their cabin and yell for Squidward and Sandy to show them their night badges. Squidward says that there is no such thing as night badges. As SpongeBob and Patrick show them their badges, they have turned into leaves with pins in them. Sandy says that they nearly had her for a second. Squidward asks where they were all night, as SpongeBob says that they were in the trawler cabin, but Sandy says that is what the other kids call their cabin, and Squidward says he wonders why, and SpongeBob and Patrick play with their long arms again. After some time, they go back to the trawler cabin, and the cabin is empty, except for the rocking chair and bunk beds. They notice their badge book with five signatures. They keep saying "weirdos" while jumping, and something catches them, which was the swamp ape. They ask him if he will be their friend, as the episode ends. 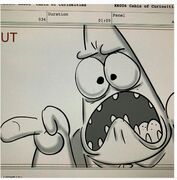