"Eek, an Urchin!"
"Bumper to Bumper" is a SpongeBob SquarePants episode from Season 9. In this episode, Mrs. Puff tries new methods on SpongeBob to help him pass his driving test.

The episode begins at Mrs. Puff's boating school, one fish is doing the boating course perfectly with Mrs. Puff, and then it is SpongeBob's turn.

SpongeBob puts the boat to reverse, then he crashes it to the obstacles and crashes into a house. Mrs. Puff gets very angry at SpongeBob after he fails the test again. SpongeBob cries and run to his house. At home, Mrs. Puff thinks about how SpongeBob could pass his driving test, and then realizes SpongeBob is afraid of the course and that if she took him to drive on a real road, he would pass and he would eventually be out of her life forever. Mrs. Puff goes over to SpongeBob's house and tells him to forget about what she said earlier. Mrs. Puff takes SpongeBob to an abandoned road, but SpongeBob is scared.

Mrs. Puff tells him to keep repeating "Focus on the road, there is nothing but the road" to get his confidence back. SpongeBob follows her instructions and imagines himself doing crazy driving tricks and poses as he proceeds to repeat the phrase. When SpongeBob has almost passed all the tests, Mrs. Puff tells him to safely dock the vessel as the last step, but due to constantly repeating the phrase, SpongeBob has mesmerized himself into a daze and cannot focus on what he is doing. He soon drives out of the road and freaks out. SpongeBob gets on a dangerous shortcut and gets back on a road, but he actually gets on a 10 lane seaway and he is gripped with fear and cannot concentrate.

A police officer sees them speeding and thought they were reckless drivers because Mrs. Puff crossed the county line, which she should not have done. The police officer tells SpongeBob to pull over, but instead he accelerates. Then when Mrs. Puff tells to stop the vessel again, he finally parks the boat safely. Mrs. Puff gives SpongeBob his driver's license and screams: "I'm free!." But the police officer does not think so. He arrests Mrs. Puff for violating the parole and rips up SpongeBob's license. As Mrs. Puff goes to jail, she says "SpongeBob, I'll get you for this! I'll get you!" and the episode ends. 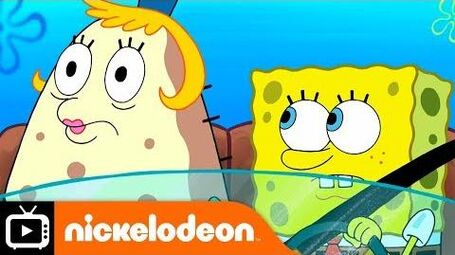 Retrieved from "https://spongebob.fandom.com/wiki/Bumper_to_Bumper?oldid=3458813"
Community content is available under CC-BY-SA unless otherwise noted.