If you were looking for the article about the the location, then see Bubbletown (location).

"Bubbletown" is a SpongeBob SquarePants episode from season eleven. In this episode, SpongeBob visits his old friend Bubble Buddy in his hometown Bubbletown.

The episode opens with Bubble Buddy giving a tour of Bubbletown and its facilities and features. SpongeBob is seen expressing enthusiasm for the town's nature.

He then sees his old friend Bubble Buddy, who has a flat tire on his motor scooter. SpongeBob then blows bubbles onto the bike and turns it into a tough-looking motorcycle. It attracts a large crowd who also want their things improved with SpongeBob's bubble blowing skills.

Later, when SpongeBob accidentally steps on a woman's bubble puppies, he starts slipping on the bubble soap uncontrollably and wreaks havoc across the whole town. Although apologetic for his actions, a bubble police officer arrives on the scene to arrest SpongeBob in Bubbletown Prison for property destruction and terrorization.

Due to his current state, SpongeBob is unable to attend his job at the Krusty Krab. Nevertheless, Mr. Krabs ventures to the Bubble Prison and bails SpongeBob out of jail. However, an officer notices them in the act, prompting Mr. Krabs to fight the prison staff. In the process, Mr. Krabs spins around uncontrollably and not only does he pop the prison staff member, he also ends up popping all of Bubbletown, turning it into just puddles of suds. SpongeBob is sad to see his bubble place go, but Bubble Buddy arrives on the scene and has a solution, which is a giant bottle of bubble soap. SpongeBob and Bubble Buddy agree to blow the town back up.

In the newly blown Bubbletown, Mr. Krabs opens a Krusty Krab-like restaurant in Bubbletown called the Bubbly Krab. However, due to the restaurant's lack of salary, he pops it out of distaste. 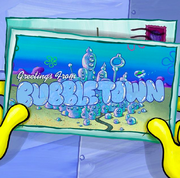 Retrieved from "https://spongebob.fandom.com/wiki/Bubbletown?oldid=2561803"
Community content is available under CC-BY-SA unless otherwise noted.