View source
If you were looking for the article about the location, then see Bubblestand (location).

"Ripped Pants"
"Bubblestand" is a SpongeBob SquarePants episode from season 1. In this episode, SpongeBob starts a bubblestand, much to the annoyance of Squidward.

The episode begins with SpongeBob walking outside to breathe in the peacefulness of the neighborhood in the morning. Suddenly, he begins to loudly build a bubble stand, much to the annoyance of Squidward, who demands SpongeBob to be quiet while he is practicing his clarinet-playing. SpongeBob stops for a time, takes a few tentative taps of his hammer, and then quickly finishes construction before Squidward has a chance to complain again.

At the newly built stand, SpongeBob offers customers an opportunity to blow a bubble for twenty-five cents. Patrick comes by and asks to try it out. However, he does not have any money, so he "borrows" a quarter from SpongeBob to pay for it. Unfortunately, Patrick's strained blowing fails to produce a bubble. SpongeBob offers to teach him for an extra quarter, which he happily "loans" to Patrick. SpongeBob then demonstrates his somewhat peculiar, yet effective, bubble-blowing technique. SpongeBob's technique produces, among others, a massive elephant-shaped bubble that gets stuck in Squidward's house and pops.

The fuming Squidward comes out and approaches the now ostensibly closed bubble stand. He demands to know how they can cause so much disruption just by blowing bubbles. SpongeBob explains that he is creating art and utilizing his technique to its fullest potential. Squidward scoffs at SpongeBob's ideas of art and marketing, sending SpongeBob and Patrick back to their homes in shame. Still snickering, Squidward begins to examine the bubble wand out of growing curiosity. As he tries to blow a bubble himself, SpongeBob quickly comes out and tells Squidward to pay a quarter, shocking him. Squidward reluctantly lays down a quarter for the bubble, suggesting that it is a very simple feat.

Squidward attempts to impress the two with his skill, to no avail. All the while, SpongeBob and Patrick try to convince him to use the technique. Fed up, Squidward furiously and mockingly copies their technique, finally screaming into the wand in anger. His screams end up producing a giant bubble, thoroughly impressing SpongeBob and Patrick.

Squidward heads back inside his house and begins to play his clarinet once more, with SpongeBob and Patrick chanting his name while dancing. However, the giant bubble descends and encapsulates Squidward's house, unearthing it and floating with it up in the air.

Once Squidward's house floats back down to the ground, Squidward ends the episode by letting out a few final feeble notes from his clarinet. 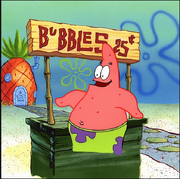 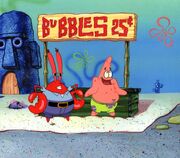 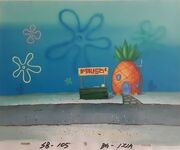