View source
If you were looking for the article about the song, then see Bossy Boots Song.

The Capsules as musical performer of Bossy Boots

"Big Pink Loser"
"Bossy Boots" is a SpongeBob SquarePants episode from season 2. In this episode, Pearl gets a job at the Krusty Krab and makes some major changes to the place.

As the episode begins at the Krusty Krab, Mr. Krabs is holding a meeting with his employees, informing them that his daughter Pearl is going to be working at the Krusty Krab during her summer vacation and that she has lots of new ideas to improve the restaurant. Squidward does not like the idea of being told what to do by a teenager, and he and SpongeBob agree to stand up to her to protect their jobs.

Pearl soon arrives and SpongeBob's resolution quickly crumbles, adoring the flamboyant new uniform Pearl gives them. After exchanging many ideas, Pearl and SpongeBob agree to turn the Krusty Krab into the "Kuddly Krab," and re-purpose the restaurant into a hip café, all with Mr. Krabs' blessing.

Squidward remains the only holdout and shakes the newly designed sign in frustration. Two passersby are surprised the Krusty Krab is seemingly gone and, thinking Squidward is a woman, ask him where a place to eat is. Enraged, Squidward quits on the spot and rips off his costume, only for a police officer to write him up for indecent exposure and stick the ticket on him as a loincloth.

The Kuddly Krab quickly becomes a hit with the teenage crowd. SpongeBob is told to make a salad, which he has never heard of, so he makes a Krabby Patty and shows it to Pearl. Disgusted, she tells him to take off the buns and the patty, leaving only tomatoes and lettuce. Upon returning to the kitchen, SpongeBob is horrified to see that his stove is gone. Pearl explains to him that Krabby Patties are no longer "hip," and that they now serve only tea and salad. SpongeBob is then given a humiliating mascot costume to wear out front, which finally drives him to complain to Mr. Krabs about what Pearl has done.

Despite putting on a brave face, Mr. Krabs fully agrees with SpongeBob's complaints and admits that all the renovations that Pearl has done to the restaurant are causing them to lose money. But for as much as Mr. Krabs knows that Pearl has got to go, he can't bring himself to fire his own daughter—instead, he makes SpongeBob be the one to fire her. SpongeBob then calls Pearl into the kitchen, dreading what he has to do. Before he can say anything however, Pearl breaks down crying and reveals to SpongeBob that she's been trying to get herself fired since the beginning—she hates working at the restaurant but took it to please her dad and doesn't want to risk disappointing him by quitting. After hearing all this, SpongeBob comes up with a plan to stage Pearl being fired outside of her dad's office.

As Mr. Krabs listens in to the exchange, he debates with himself whether he should allow it to happen. The sight of his empty safe with a spider web finally prompts him to yell to SpongeBob to get on with it, but with the words, "Pearl, you're fired," the strain on Mr. Krabs' heart knocks him out cold. Pearl thanks SpongeBob for letting her go and kisses him on the cheek before dashing off to the mall with her friends.

SpongeBob enters Mr. Krabs' office to report his success, only to find him passed out on the floor. After being revived with a $20-bill, Mr. Krabs laments what's been done to Pearl—but SpongeBob assures his boss that Pearl's fine, claiming that she's off to bigger and better things. While he's glad that the situation with his daughter is resolved, Mr. Krabs still isn't sure about what to do with all the Kuddly Krabs' decorations/merchandise. SpongeBob happily takes them all home in exchange for one year's salary, which makes Gary sad while the episode ends from there. 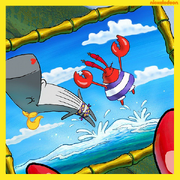 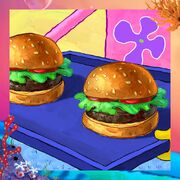