Encyclopedia SpongeBobia
Register
Don't have an account?
Sign In
Advertisement
in: International SpongeBob SquarePants, Nickelodeon, Sections in need of expansion,
and 7 more
English

Quebec and the rest of Canada

Bob l'éponge is the French version of SpongeBob SquarePants. In addition to having the episodes dubbed into this language, the French version of the intro has some different animations that are also seen in the Korean (EBS version), Italian, Castilian Spanish, and Welsh versions of the opening. It airs on Nickelodeon (in France, Switzerland and Wallonia), and previously aired on VRAK Vrak (in Quebec). It is part of International SpongeBob SquarePants.

Episodes aired in this dub before airing in the United States

The boats with SpongeBob form his face in many different colors.

These scenes replace the tiki text.

This replaces the text normally seen.

The "Created By" screen in standard-definition.

The "Created By" screen in high-definition.

The Big Book of Snail Care from "Sanctuary!" 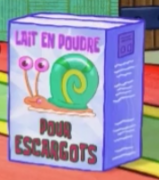 The Powdered Snail Formula from "Sanctuary!"

Founders Day at the Krusty Krab from "What's Eating Patrick?"

The fans are excited in "What's Eating Patrick?"

The "Downloading..." screen from Karen's Virus. 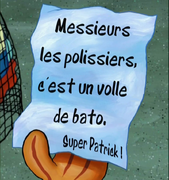 The note that got Mrs. Puff arrested in Patrick-Man!

Winter Menu From There’s A Sponge In My Soup

The Tidal Zone Logo From No Pictures Please

the "Alaskan Bull Worm" and the "Big Scary Pink" cards From Sandy, Spongebob And The Worm Only To Be Seen On TV 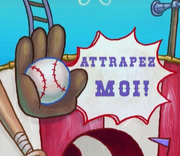 Delivery Box With Spongebob’s Name On It From Chatterbox Gary

Final Lesson: How To Pick Things Up Card From The Ghost Of Plankton

The "Next Morning" time card from "Sanctuary!"

The "Next Morning" time card from "Pineapple Invasion"

One Season Later from "The Clam Whisperer"

The "Later That Night" card from The Krusty Slammer.

The "The next morning" card from The Ballad of Filthy Muck. (the Narrator coughs too)

This is a comparison of the different versions of the French intro.