This is the page about the Latin American Spanish dub. For other uses, see Bob Esponja (disambiguation).

(This is a cartoon about a sea sponge called SpongeBob. SpongeBob lives at the bottom of the Pacific Ocean, near the island of Bikini Atoll, and is always getting into trouble, along with his friend Patrick Star.)

Bob Esponja debuted on Nickelodeon in Latin America on November 7, 1999.[1]

Episodes premiered before the United States

Note: "Pineapple RV" does not count on this list due to this episode was released digitally on Mundonick.com 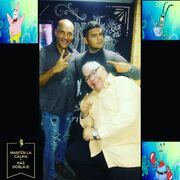 Retrieved from "https://spongebob.fandom.com/wiki/Bob_Esponja_(Latin_American_Spanish)?oldid=3440388"
Community content is available under CC-BY-SA unless otherwise noted.