View source
This is the page about the Season 1 episode. For other uses, see Boating School (disambiguation).

"Pizza Delivery"
"Boating School" is a SpongeBob SquarePants episode from season 1. In this episode, Patrick attempts to help SpongeBob pass his driving exam.

An excited SpongeBob rides his unicycle to Mrs. Puff's Boating School for his driving exam to start the episode, eager to finally get his driver's license. When he arrives, he throws his unicycle away, falsely assuming he will definitely pass and no longer needs it. Having taken the oral exam 37 times before, SpongeBob is able to answer the questions before Mrs. Puff even asks them. However, upon reaching the driving portion, SpongeBob gets nervous and quickly loses control of the boat and crashes into a lighthouse, causing Mrs. Puff's body to inflate.

Later that night, SpongeBob complains about his failure to Gary, who asks him to go for a walk, which he declines. Patrick is then heard talking to him from a walkie-talkie under his covers. He asks SpongeBob to head to his closet for a "surprise," and SpongeBob finds Patrick wearing his clothes and calling himself "Patrick SquarePants." SpongeBob is too depressed to laugh at this, and explains his problem to Patrick and mentions that he needs someone to help him think straight during the exam. Patrick quickly devises a plan. He puts a walkie-talkie inside SpongeBob's head so that he can talk SpongeBob through the test, hiding the antenna with a cowboy hat.

The next day, SpongeBob goes back to take the test again. When asked to start the boat, he initially panics, but Patrick's instructions keep him calm. Just after SpongeBob puts the boat in drive, he almost floors the pedal, but Patrick tells him to "Freeze, mister!," and SpongeBob's foot stops just before it touches the pedal. Patrick then tells him to use his big toe on the pedal, and SpongeBob's toe pops out of his shoe and it presses the pedal. This is followed by a montage of SpongeBob acing the exam, interspersed with shots of Patrick eating SpongeBob's food, and reading his diary while helping him.

Mrs. Puff is floored by SpongeBob's sudden improvement and jokingly suggests that his success is due to an antenna under his hat through which "some guy miles away from here" is giving him all the answers. SpongeBob (and Patrick) finds this hilarious until Mrs. Puff tells him it would be cheating to do so. Upon realizing he has been cheating, SpongeBob goes into hysterics, making Patrick realize that his method is bad. Devastated and ashamed about what he did, Patrick flees to his house, crying. SpongeBob starts driving wildly all over the course and sobbing, while Mrs. Puff, in a panic, tries desperately to stop him. SpongeBob is too distraught to listen and crashes the boat, failing the test again, and the inflated Mrs. Puff is taken to the hospital. As the episode ends with SpongeBob leaving boating school, he finds Gary riding his unicycle. SpongeBob rides off on it, with Gary atop his head, and happily rides off to visit Mrs. Puff at the hospital, thus ending the episode from there.

The idea for Mrs. Puff and her Boating School was what "saved" the show from being passed on by Nickelodeon.[1] If Stephen Hillenburg (the series' creator) did not fulfill Nickelodeon's request that SpongeBob attends a school, they would not have agreed to greenlight the first season.

Mrs. Puff was the last one of the main characters to be created and designed by Stephen Hillenburg. She had not been created yet when Hillenburg finished his series bible, a book outlining the show's main concepts and setting. The June 2003 issue of Nickelodeon Magazine states that when Hillenburg pitched SpongeBob to Nickelodeon, he "had yet to come up with the idea that Mrs. Puff and SpongeBob would be on an endless quest to get SpongeBob a driver's license." Thus, some early development artwork for the show depicted SpongeBob driving a submarine-esque vehicle with ease. To account for her absence, a sketch was captioned "The gang's all here (almost!)."

After Hillenburg pitched the pilot episode, Nickelodeon executives did not immediately approve production and wanted to instate a major creative change: making SpongeBob a child who went to school. Hillenburg specifically said the following in a 2009 interview: "At the beginning people give you notes and you have to fight back. It was a new show and no-one knows if a new show will work. Nick had decided it didn't want any more animal shows and wanted stories with kids, like Hey Arnold! They actually wanted to make 'Arnold under the sea' and make SpongeBob a child. I said 'no, that's not the show'. I said we'll show the parents sometimes and put him in school – but it would be a [boat] driving school."[2] Additionally, they wanted every episode to focus on his school life.

Hillenburg ended up "making concessions" with Nickelodeon by coming up with a driving school. This way, SpongeBob could regularly attend a school while remaining age-ambiguous. In 2012, he recalled that his compromise eventually improved the series: "A positive thing for me that came out of it was... it brings in a new character, Mrs. Puff, who I love." He explained that she added "a new aspect to the show" that he wouldn't have found otherwise.﻿[citation needed] 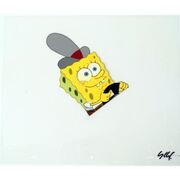 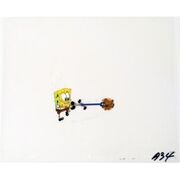 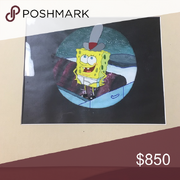