View source
If you were looking for the article about the Japanese DVD, then see Boating Buddies (DVD).

"The Krabby Kronicle"
"Boating Buddies" is a SpongeBob SquarePants episode from season 6. In this episode, Squidward must attend Boating School after getting a ticket, where SpongeBob is overly joyed by his unexpected appearance.

In the beginning of the episode, SpongeBob is brushing Gary, when he suddenly hears a strange noise. He goes outside to investigate, only to find out that it is just Squidward breathing. Squidward then tells SpongeBob that he will pay him five dollars if he gives him peace and quiet for the rest of the day. However, Squidward already gave SpongeBob five dollars to leave him alone yesterday. He gets annoyed, so Squidward begins walking away. He then finds out that SpongeBob is following him, so he starts running and he jumps onto his boat. However, he cannot find the keys and then SpongeBob arrives at Squidward's boat. Squidward then becomes furious, only to find out that SpongeBob wanted to give him his keys. Squidward drives away and literally drives through a stop sign. He gets pulled over by a police man, telling him that he needs to go to boating school.

Later, during lunchtime, Squidward tries to avoid SpongeBob. He then decides to eat in the bathroom, but he sees SpongeBob's feet. Squidward angrily throws his sandwich on the floor, bangs the door and yells at SpongeBob, but when it opens, it is revealed to not be SpongeBob, but rather, a tough guy. Squidward awkwardly freaks out that he thought it was SpongeBob and gets beaten up. He arrives back in class with SpongeBob, and Mrs. Puff tells him that he has to drive with SpongeBob for a test. So they get inside a boat and SpongeBob is the driver. However, he drives out of control and crashes into a research lab. There, he, Squidward, and Mrs. Puff shrink and get washed down the drain. SpongeBob and Mrs. Puff end up in a water fountain back at Mrs. Puff's Boating School, while Squidward ends up in the bathroom and gets beaten up again.

The scene changes to everyone back in class. Mrs. Puff explains that everyone is going to do a test. But when SpongeBob tries to help him, Squidward snaps at him exclaiming that they are not "Boating Buddies" and he never wants help from him ever again. SpongeBob's feelings are hurt. However, Squidward cannot do the test because he cannot pick up the pencil, so he asks for SpongeBob's help; when the sponge reminds him of what he said, Squidward denies it, only for his voice to have been recorded by another student. Finally, when Squidward admits that he and SpongeBob are "Boating Buddies," SpongeBob cheers. But time runs out and Squidward asks Mrs. Puff what to do. She then says that he needs to come back the next week to retake the test. Squidward finds out that SpongeBob also failed the test and he has to come back the next week too, and Squidward screams, as the episode ends. 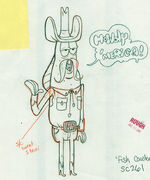