He is a large, dark lime green octopus. He wears a purple bandanna over his eyes and a white T-shirt. He also drives a large, blue boat with a bumper that looks like one from a train in the front, turbo engines in the back, and the number "6" in red text on the side. Blowtorch can breathe fire, hence his name.

He first appears when Captain Lutefisk introduces him at the beginning of the Demolition Derby. He shares a laugh with the Kruncher after seeing SpongeBob pull up. He attempts to crash into SpongeBob, but ends up getting his face run over by the latter. He tries one last attempt to crash into SpongeBob, but fails and ends up colliding with a lifeguard's boat, losing the Demolition Derby.

Add a photo to this gallery
Merchandise Images 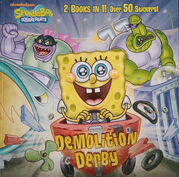 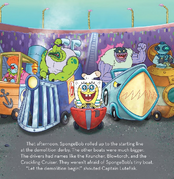 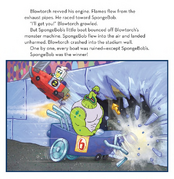 Add a photo to this gallery
Production Images

Add a photo to this gallery
Retrieved from "https://spongebob.fandom.com/wiki/Blow_Torch?oldid=3243213"
Community content is available under CC-BY-SA unless otherwise noted.