"Mermaid Man vs. SpongeBob"
"Blackened Sponge" is a SpongeBob SquarePants episode from season 5. In this episode, SpongeBob gives himself a black eye, and tells tall tales over how he got it to try to look tough and avoid being embarrassed.

As the episode begins, SpongeBob has a dream where he has to save someone from being tied up on railroad tracks while being muscular with a tan shirt. until he encounters a fish named Jack M. Crazyfish. They play rock-paper-scissors and SpongeBob wins, but Jack M. Crazyfish cheats and they have an argument. SpongeBob wakes up and realizes that it was just a nightmare. His dreams disturb Gary's sleep all night. When SpongeBob goes to his bathroom to brush his teeth, he cannot open his toothpaste, so he uses a wrench to open it. However, he accidentally gets the wrench stuck in his eyelid and gets a hideous black eye from the accident. When he tells how he got it to Gary, it causes Gary to snicker and leave him, so he vows not to tell anyone to avoid being laughed at and humiliated.

SpongeBob demonstrates to Jack M. Crazyfish what really happened to him. SpongeBob gets a second black eye in the process. Jack M. Crazyfish tells him that he came to the Krusty Krab because he heard that SpongeBob makes great Krabby Patties, and he is hungry for one.

SpongeBob then serves him Krabby Patties, but because he has two black eyes, he cannot see very well. The patties then start flying toward Jack M. Crazyfish. Jack M. Crazyfish loses his temper and challenges SpongeBob to a game of rock-paper-scissors. SpongeBob wins the first time, but doesn't realize that Jack M. Crazyfish had cheated, and SpongeBob yells "NO!" at the end of the episode. 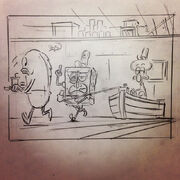