View source
If you were looking for the article about the VHS tape, then see Bikini Bottom Bash!. 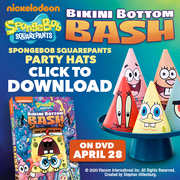