Bikini Bottom Adventures is a SpongeBob SquarePants DVD that was released on June 5, 2007 and contains seven episodes from season 5. 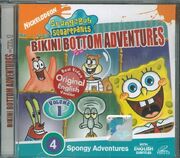 Retrieved from "https://spongebob.fandom.com/wiki/Bikini_Bottom_Adventures?oldid=3098961"
Community content is available under CC-BY-SA unless otherwise noted.