"Big Sister Sam" is a SpongeBob SquarePants episode from season seven. In this episode, Patrick's older sister Sam comes to visit him. 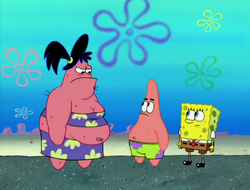 The episode opens with SpongeBob and Gary sleeping. Patrick is cleaning his rock with a mop then wakes them up. SpongeBob asks him why he is doing it and he responds by saying his sister Sam Star, is coming. Patrick also reveals that they were lost in the surf when they were only kids. Squidward screams angrily and demands peace and quiet, but Sam then arrives in a bus and punches the door down. She is revealed to be a huge starfish. Sam hugs and almost suffocates Patrick. Patrick introduces SpongeBob to Sam and Sam, mistaking SpongeBob to be a danger, protects Patrick by throwing SpongeBob. Patrick suggests that they go inside to "play," but Sam explains how the house is too small. Sam then takes a briefcase filled with sand and constructs a new house, made of sand. Patrick thanks her. However, Squidward complains that his house is filled with sand. Again, Sam feels overprotective and moves Squidward's house with only her bare hands. Squidward makes jokes about Sam saying, how she is bigger, and dumber than Patrick. Sam responds by getting angry and then starting to cry because she already knows it is all true. Her giant tears throw both Squidward and SpongeBob.

After that, Patrick becomes overprotective of Sam by saying that SpongeBob and Squidward are "meanies" and saying that they should blecorate (decorate) the rock. However, she uses parts of Squidward's house to decorate it, damaging it greatly. Then Squidward gets angry and calls her a thief. Then SpongeBob tries to talk some sense into Patrick, but Patrick does not care that Sam deliberately dismantled Squidward's house. Then he starts crying, thinking SpongeBob has become a traitor and gets head-butted by Sam along with Squidward back to their houses, damaging his house further. Squidward gets angry and drops a rock on the house, ruining the "spiffy." In response, Sam and Patrick come out of the house and Sam chews up the loose parts and spits them at Squidward's house, completely destroying it.

In the last act of retaliation, Squidward then drives a bulldozer at Patrick, Sam, and the house, trying to destroy it in a crazed rage. SpongeBob tries to stop him but to no avail. Sam, who throws the bulldozer at SpongeBob's house, stops Squidward (who suddenly disappears for the rest of the episode). After that, SpongeBob finally becomes upset at the destruction of his house, making Patrick finally see what SpongeBob means. Patrick tries to tell her to control her temper, but she gets very angry and destroys her own home while Patrick sacrifices himself to save the house. Patrick lays there unconscious but SpongeBob successfully wakes him up by using cookie dough. Sam feels very guilty and explains that she must leave (she is late for a manicure and shows them her nails). As Sam leaves on the bus, SpongeBob and Patrick laugh about their experience with Patrick's sister.