View source
If you were looking for the article about the VHS, then see Big Pink Loser (VHS).

"Bubble Buddy"
"Big Pink Loser" is a SpongeBob SquarePants episode from season 2. In this episode, envious of SpongeBob's numerous awards, Patrick starts to work at the Krusty Krab and act like SpongeBob in an attempt to get his own award.

As Patrick wakes up one morning, a mailbox is shoved into his mouth. Curious, he opens it and finds a large, shiny trophy inside. Excited, he starts showing everyone his new award, including the jellyfish and even the Bikini Atoll Island. He shows it off to SpongeBob, who then realizes that the trophy is actually for him after spotting his name on it.

Patrick is disappointed as he hands the award to SpongeBob, feeling even more disappointed when he unwittingly opens a closet filled to the brim with SpongeBob's awards. SpongeBob tries to help him find a way to win an award, and eventually, Patrick decides to get a job working alongside SpongeBob at the Krusty Krab. Squidward quits in response.

First, Patrick is assigned to take some food to a customer. However, every time he brings it to the customer, he eats it, even as SpongeBob breaks down the process for him. A simpler task SpongeBob gives Patrick is to answer the phone, but he ends up getting angry when he thinks people are calling the wrong number when they are calling the "Krusty Krab" (he says "No, this is Patrick!" after 3 calls) which SpongeBob then tells him is the actual name of the restaurant. At this point, Patrick is almost completely demoralized, but SpongeBob urges him on. Patrick follows up with sweeping dust from under the floor near table 3, but uses the wrong end of the broom. Suddenly, a delivery man comes in with a load of awards for SpongeBob. This surprises and angers Patrick so much that he whacks the floor with the broom eight times, making dust fly everywhere and all the customers cough. Patrick loses control and laments that he will never win a trophy.

After rushing the upset and disheartened Patrick off into the kitchen, SpongeBob presents him with the extremely simple and basic task of opening a jar. When even this proves to be difficult at first, SpongeBob instructs him to do it exactly as he does. This mantra prompts Patrick to open the jar successfully. However, for a second, Patrick thinks he broke it. SpongeBob tells him he did it right, and he and SpongeBob begin celebrating. Patrick now feels more confident and poised, and he controls his temper by telling SpongeBob how he opened the jar. SpongeBob tells Patrick to do what he does and he will have an award someday.

The next day, Patrick starts taking even more cues from SpongeBob. He ends up wearing the same outfit as him and copying every single one of SpongeBob's actions and mannerisms in the hope of achieving the same success as his friend, much to the surprise of the Bikini Bottom citizens, who think they are seeing double of SpongeBob. In annoyance towards Patrick's imitation, SpongeBob seemingly places his hand on a hot grill to prove Patrick was copying him. Patrick takes the bait, and once he cries out in pain, SpongeBob reveals that he was using a decoy hand. As he and Patrick run back to their neighborhood, Patrick's hat flies off, and Squidward picks it up while retruning to work. SpongeBob tries multiple antics to convince Patrick to stop copying him, all of which are unsuccessful. SpongeBob even notices that Patrick has painted his rock to look almost exactly like SpongeBob's pineapple.

SpongeBob resorts to dressing up as Patrick, but it only makes Patrick more certain of the fact that his old self was nothing but a "big pink loser." As it turns out, however, the next award to arrive, which Patrick initially thinks is for SpongeBob again, is actually for a person who won it for "doing absolutely nothing longer than anyone else." This award turns out to be for Patrick, and SpongeBob is proud of him. Overjoyed, Patrick decides to protect his new title by going back under his rock and falling fast asleep, returning to his old, lazy self.

Art from a deleted scene. 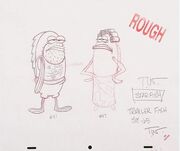 Art of the fishes from the deleted scene. 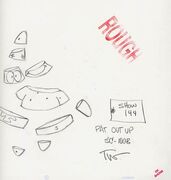 The original name for the episode.