View source
This is the page about the episode. For other uses, see Best Day Ever (disambiguation).
If you were looking for the article about the event, then see Best Year Ever.

"The Gift of Gum"

"The Gift of Gum"
"Best Day Ever" is a SpongeBob SquarePants episode from season 4. In this episode, SpongeBob's best day ever doesn't go as planned.

SpongeBob starts the episode by waking up and singing the song "Best Day Ever," and he describes to Gary what he plans to do on this day: do his "perfect" job at the Krusty Krab, practice karate with Sandy, go jellyfishing with Patrick using his new high-tech net, and at the end of the day, attend Squidward's big clarinet recital. However, SpongeBob's "Best Day Ever" does not turn out as he plans. He goes to the Krusty Krab, only to find it condemned due to a severe nematode infestation. He then tells the nematodes to leave, but they eat his pants instead. SpongeBob begins playing the "Best Day Ever" song with his nose, causing the nematodes to follow him. Mr. Krabs tells SpongeBob to keep playing and lead them as far away as possible, and he does so until they all fall asleep (including SpongeBob).

He then goes to Sandy's Treedome for karate, but Sandy is busy trying to fix a leak in the roof of her Treedome. SpongeBob thinks that this is a trap, and attacks her anyway. Sandy hits him and sends him flying up to the roof, and his glove sticks to it, sealing the leak. Afterwards, SpongeBob heads over to Jellyfish Fields to go jellyfishing with Patrick, but Patrick explains that he has broken his net. SpongeBob gives him his old net to use, but he quickly breaks it as well. Finally, SpongeBob gives Patrick his brand-new net and sits there watching as Patrick has fun jellyfishing with it.

Finally, when SpongeBob goes to Squidward's clarinet recital, Squidward tells him that he cannot play in the concert because his clarinet reed is shot. SpongeBob pulls out one of his teeth to replace the reed, and angrily demands Squidward to put on the show, frustrated that the majority of his "Best Day Ever" is ruined. When SpongeBob tries to enter the concert, the doorman will not let him in because he does not have a ticket. He tries various methods of sneaking in, but is caught every time. Eventually, the doorman realizes who SpongeBob is (Mrs. Puff said his name while hiding in her purse), and lets him in because he is on the VIP list. However, the concert ends just as SpongeBob gets into his seat, and then he finally loses it.

Reaching his breaking point, SpongeBob goes up on stage, rips the curtains and starts angrily whining to the audience about how his "Best Day Ever" was completely destroyed. However, his friends go up and remind SpongeBob of how he helped them with their problems out of his kindness, and to make everything up to him, they hold a "very expensive" production in which SpongeBob performs his song, "Best Day Ever," to complete his real Best Day Ever with his friends by his side. After hours, SpongeBob is still singing, his friends are tired and sleepy, the audience has left the concert hall, and the janitor is sweeping the floor. As the episode ends with Squidward asking, "How long do we have to keep this up?", Mr. Krabs replies with "Just 'til his little heart gives out, Squidward. Just 'til his little heart gives out." 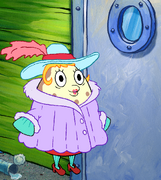 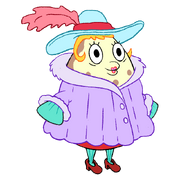 SpongeBob SquarePants - Best Day Ever animatic
Storyboards for the episode

A print advertisement for the episode

"I dare you to have a lousy day while singing that song! Pure pop bubblegum!"