This book starts with SpongeBob can't wait for his six-month checkup at the dentist! That morning he discovers that not only has Patrick never gone to the dentist, but he's never even brushed his teeth! SpongeBob calls his dentist and gets Patrick an appointment that same day.

SpongeBob gets out of bed and tells Gary that it has been six months, two hours, and seven minutes since his last dental cleaning. He says that he is going to the dentist again. SpongeBob then runs to go brush his teeth.

SpongeBob is surprised that Patrick does not floss or brush his teeth. He asks if he has semiannual dental exams. Patrick says that he does not. SpongeBob then asks him if he has ever been to the dentist. Patrick responds, "What's a dentist?"

SpongeBob says that Patrick better come along with him to the dentist. He then says that he better call to get an appointment.

Later, at the dentist's office, Patrick is clutching onto SpongeBob's leg because he is scared to go and asks SpongeBob if it will be scary. SpongeBob says that it is not and that his dentist's office is the friendliest place in the world. He then says that he is the favorite patient of Dr. Gill Gilliam, his dentist. He says that everyone knows him there and they walk in.

A receptionist asks SpongeBob who he is. Patrick says that he thought that everyone knew him. SpongeBob says that she must be new.

Debbie and Dr. Gill burst into the waiting room and hold hands with SpongeBob, singing, "I brush and floss my teeth each day to ward away that tooth decay!"

Patrick says that he never realized that getting his teeth cleaned could be so much fun. SpongeBob says that Patrick has not seen anything yet. He pulls Patrick into the hallway and shows him the "No Cavi-Tree." Patrick asks why there are so many teeth that have SpongeBob's name on them. SpongeBob explains that one gets their name posted up there every time they have no cavities at their visit. SpongeBob also explains that he gets a new tooth added there every time he visits because he has never had a cavity. A few teeth also have Squidward and Sandy's names on them.

Patrick gets in the chair and opens his mouth. Debbie and Dr. Gill look at Patrick's teeth. Gill then tells his receptionist to cancel the rest of the appointments for that day because it is going to take a while to clean Patrick's teeth.

Several hours later, Patrick's teeth are finally clean. Debbie says that SpongeBob and Patrick can pick out a toothbrush. SpongeBob tells Patrick to follow him and that he cannot wait to see what colors of toothbrushes they have. Dr. Gill tells them that the light bulb used to view the X-rays needs a new bulb. He tells them to go home and that he would call the next day to give them their results.

The next morning, Patrick bursts into SpongeBob's house yelling, "No cavities!" He then explains that Dr. Gill's receptionist called to tell him that he has none. He then says that he can have his name in the No Cavi-Tree. SpongeBob says that the news is great. SpongeBob's phone rings. SpongeBob answers it and says, "Yes, this is SpongeBob. I... I... what? Okay. I'll be there at two o'clock. buh-buh-buh-bye." He then hangs up the phone and bursts into tears. He yells, "I have four cavities!" Patrick says that he will go with SpongeBob to the dentist's office to get them filled.

SpongeBob then says, "I have no cavities? I have no cavities!" He leaps out of the chair. Patrick congratulates SpongeBob. They all dance happily. Patrick then realizes that he has cavities and he stops dancing. Debbie tells Patrick to get in the chair. She then tells him that Dr. Gill will have them quickly filled.

After Dr. Gill is finished, Patrick says that it did not hurt. Dr. Gill tells Patrick to floss every night, brush for at least two minutes twice a day, and to visit him every six months. He then tells him to pick a new toothbrush. 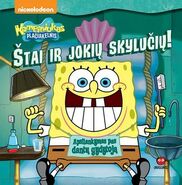