View source
This is the page about the 2003 video game. For other uses, see Battle for Bikini Bottom (disambiguation).
Video game
Gallery
Transcript

PlayStation 2
GameCube
Xbox
Game Boy Advance
PC
Battle for Bikini Bottom is a SpongeBob SquarePants video game that was released on October 31, 2003 in North America.[2] The game features an original storyline in which the player defends Bikini Bottom from a horde of robots created by Plankton. Three distinct versions of the game exist, with unique gameplay styles and differences in certain plot details:

Battle for Bikini Bottom received mixed or average reviews upon release, but it was a commercial success. The console version of The SpongeBob SquarePants Movie video game, released one year after this game, shares the same developer, game engine, and various graphics from Battle for Bikini Bottom, and even features robot from this game in a dumpster as an Easter egg, leading fans to consider the Movie game as the unofficial spiritual successor. An official successor to this game called The Cosmic Shake will release 19 years later in 2022.[3]

Battle for Bikini Bottom: Rehydrated, a remake of the Heavy Iron Studios console game, was released on June 23, 2020. Rehydrated includes all of the content of this game, as well as a set of achievements and a two-player cooperative horde mode.

The following list is in the same order as the game's credits that play within the SpongeBall Arena. The robot bosses, however, do not appear in the game credits.

Mr. Krabs and Mermaid Man are the only two characters who are not voiced by their original actors, Clancy Brown and Ernest Borgnine, and are instead both voiced by Joe Whyte.

The game's credits misspell the names of both Rodger Bumpass (as "Roger Bumpass") and Brad Abrell (as "Brad Arbell").

All versions of the game share the same basic plot. Inside the Chum Bucket, Plankton comes up with another plan to steal the Krabby Patty formula from the Krusty Krab. He builds a machine called the Duplicatotron 3000 and uses it to create an army of robots, which he plans to use to destroy the Krusty Krab and succeed in his long-time goal. Although the plan goes smoothly at first, the robots start to rebel against Plankton, at which point Plankton realizes his fatal error: he forgot to set the "Obey Plankton" switch to "Obey." As a result, the robots lock Plankton out of the Chum Bucket and start to go on a rampage to destroy Bikini Bottom.

Meanwhile, in SpongeBob's house, SpongeBob SquarePants and Patrick Star play with their toy robots to pass the time. SpongeBob wishes for robot friends to play with, and the next morning, he finds Bikini Bottom under attack by an army of robots. Believing that the rampage is his own fault due to his "wish," SpongeBob sets out to clean up his mess and help his friends, including Plankton, without realizing that Plankton caused the invasion.

SpongeBob receives a fax from Mr. Krabs, stating that he would give SpongeBob a Golden Spatula for increasing amounts of Shiny Objects, the game's currency, he collects for him. Outside, SpongeBob finds a disappointed Plankton, who denies knowledge of the robots' origins and claims that they appeared suddenly and kicked him out. Plankton convinces SpongeBob to help him back into the Chum Bucket by embarking on a perilous quest to find Golden Spatulas and get rid of the robots, secretly intending to regain control of them once back inside.

Every area in the game has a unique set of missions to collect Golden Spatulas including a main overarching mission. SpongeBob travels to Jellyfish Fields, where he finds that Squidward has been stung by jellyfish and travels to defeat King Jellyfish in a battle and obtains some of his jelly for Squidward's stings. SpongeBob also helps Mrs. Puff by locating stolen steering wheels in Downtown Bikini Bottom, stolen paintings in Rock Bottom, and missing students (whom she insists are "campers") in the Kelp Forest. King Neptune calls SpongeBob and Patrick to the Poseidome to defeat Robot Sandy. He then goes to the Mermalair, where he fights Prawn, one of Mermaid Man's archenemies. He also helps Mermaid Man and Barnacle Boy several other times throughout the game, as well as Larry the Lobster, his pet snail Gary and the Flying Dutchman, in other areas like Goo Lagoon, Sand Mountain, and the Dutchman's Graveyard, where Sandy beats the Dutchman in a fight. Later, SpongeBob and Sandy save Squidward from Robot Patrick.

SpongeBob then falls asleep, allowing him to enter his friends' dream worlds to search for more Golden Spatulas. SpongeBob and his friends finally gain access to the Chum Bucket around the same time as Plankton, discovering a gigantic Robot SpongeBob, and learn that Plankton was responsible for making the robots. Plankton sets the switch on the Duplicatotron to "Obey" (by placing an "Obey" sign over the "Don't Obey" setting), only to find out a Robot Plankton has been controlling the robots instead. Robot Plankton tells SpongeBob he has interfered in his plans for the last time and tells him "SpongeBob, meet SpongeBot." SpongeBob attempts to disable Robot SpongeBob's brain from the inside while fending off frequent attacks from Robot Plankton. Upon succeeding, SpongeBob hopes that Plankton learned his "lesson." The Duplicatotron produces several more Robot Planktons, which begin arguing among themselves. SpongeBob states that their work is not done, as there are still many robots running amok in the city.

The game then cuts to the SpongeBall Arena, where the player rolls around in ball form in a large arena, while the credits roll on the screen. If the player collects all 100 Golden Spatulas, the game ends by showing the special cutscene of most of the game's characters singing the theme song, to Squidward and Plankton's chagrin.

The console version of Battle for Bikini Bottom is a 3D platformer developed by Heavy Iron Studios and released on the PlayStation 2, GameCube, and Xbox.

The player has access to many cheat codes in the console games. All cheat codes can only be entered in the pause menu while holding a specific set of buttons:

While holding the above buttons, the player must enter a cheat code in a short timeframe, making some of them difficult to execute.

The cheat codes are as follows:

Like any video game, the console versions of Battle for Bikini Bottom feature a number of glitches, bugs, and exploits. Speedrunners take advantage of some of these to go through the game faster. The player can always revert these by restarting the game or the console, or sometimes by using the pause menu to teleport to a Golden Spatula.

The Game Boy Advance version of Battle for Bikini Bottom is a 2D platformer developed by Viarious Visions. It bears similarities to Super Mario games with puzzle mechanics. Players can only play as SpongeBob in this version of the game.

The PC version of Battle for Bikini Bottom is a point-and-click mini-game adventure developed by AWE Games. Players can play as various characters in this version of the game, including SpongeBob and Gary the Snail. The following is the list of mini-games:

Two unused levels are present in the game files of the Xbox and GameCube version. One is an early version of Patrick's Dream featuring a whole dessert-themed level. The other one is a scrapped third phase for SpongeBot's boss fight with his anchor arms. SpongeBob's sundae was planned to be a power-up that would have allowed the player to run fast and break stone tikis.

Among the unused models in the game, there's early designs for the Flying and Thunder tikis alongside a textureless worm and a soccer ball which was an early version of the Throw fruits. Many unused voice clips exists including early recordings and dialogue such as SpongeBob, Patrick and Sandy reacting upon seeing a tiki or a boss.

According to concept art, a Glove World! level was considered for the console versions of the game alongside a Robo-Squidward's boss fight. The latter would be brought back for the multiplayer mode of Battle for Bikini Bottom Rehydrated.

The console versions of Battle for Bikini Bottom received mixed or average reviews, according to Metacritic.[8][9][10] The Official PlayStation Magazine awarded the game 4.5 out of 5.[11] IGN awarded the game a 7.3 out of 10.[12] Despite the average review scores, the console versions of the game won the "Favorite Video Game" award at the 2004 Kids' Choice Awards[13] and sold over 1.25 million copies, enough to be reprinted under the Player's Choice (GameCube), Platinum Hits (Xbox), and Greatest Hits (PlayStation 2) budget labels.[14] The console games maintained a cult following for over a decade, culminating in its prominence in speedrunning and the release of Battle for Bikini Bottom - Rehydrated in June 2020.

The following are walkthroughs that guide players through the game. 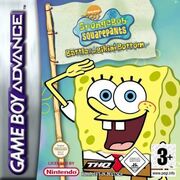 This game appropriately makes many references to the show. The below references are from the console version (and by extension, Rehydrated).