View source
watch 01:48
SpongeBob SquarePants Recap: Band Geeks
Do you like this video?
Play Sound
If you were looking for the article about the DVD, then see Band Geeks (DVD).

"Graveyard Shift"
"Band Geeks" is a SpongeBob SquarePants episode from season 2. In this episode, Squidward lies to Squilliam about having a band to perform at the Bubble Bowl, but when Squilliam calls him and reminds him about it, he creates his own band with everyone in Bikini Bottom.

The episode begins one day, Squidward was playing his clarinet but was disturbed by a doorbell which is a doctor who arrived at his house after mistaking his clarinet playing for a "dying animal," he receives a call from his former high school classmate and rival Squilliam Fancyson. The rich, successful, and very smug Squilliam informs Squidward that he is the leader of a band that is supposed to play the prestigious Bubble Bowl the following week, but he will be unable to attend. He gives Squidward a backhanded offer to replace him, correctly suspecting that Squidward does not have his own band. However, Squidward defiantly insists that he does have a band and accepts the offer, before posting flyers around Bikini Bottom looking for people to join his band.

On the first night of rehearsals, Squidward brings his rented instruments to a practice hall filled with townspeople. Upon discovering that none of his prospective bandmates have any previous musical experience, Squidward teaches them the basics. Unfortunately, the night doesn't end well as Squidward gets pinned to the wall by drumsticks the players mistook as mouth instruments while Sandy beats up Patrick and shoves his body through the bore of a trombone after he kicks her leg.

Things do not get any better during the second day of training; while practicing a march through the street two flag twirlers are killed when they spin their flags too fast, causing them to fly into the air and crash into a passing blimp. On the third day, Squidward checks on Plankton's harmonica solo, though he becomes exhausted and collapses from running back and forth between the holes since the harmonica is much bigger than him.

On the fourth and final day of practice, Squidward says that while none of them have made any improvement since the beginning, he suggests that everyone play loud so they will be good. Unfortunately, they take this theory a bit too literally as they play so loud and badly that the windows of the practice hall break, and Squidward's face is deformed beyond recognition, prompting him to change the plan to playing extremely quietly so nobody will hear them. The band members then begin to insult each other, and despite Squidward attempting to quell the rising tensions, a mass brawl breaks out that damages most of the instruments. When the clock hits 10:00 PM, the fighting ends and everyone starts to head home.

Squidward stops them at the entrance and expresses his disappointment at their lack of progress and for not taking his dream seriously. After Squidward leaves in distress at his failure, a remorseful SpongeBob asks the townspeople to think about all of the times Squidward came through for them. Despite drawing a blank, they are convinced enough to give practice one more try for Squidward's sake, with SpongeBob taking command as the conductor.

The day of the performance arrives and Squidward prepares to finalize his band's cancellation, only to find Squilliam waiting for him at the entrance of the Bubble Bowl. Squidward tries to explain that his band can no longer play as they all died in a marching accident, but they suddenly appear behind him in full uniform and with their instruments at ready, forcing Squidward to go through with the performance.

As everyone enters a huge glass dome, Squidward bemoans the humiliation that he is certain is awaiting him. The dome rises into a football stadium filled with human fans. Squidward, still fearing that the performance will be a disaster, nervously begins conducting. But to his and Squilliam's astonishment, the band performs a rock ballad called "Sweet Victory" and it turns out to be a tremendous success. As the crowd sways in awe and Squilliam faints in shock, Squidward throws away his baton and leaps into the air in triumph, ending the episode. 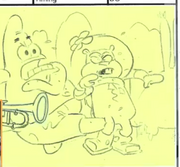 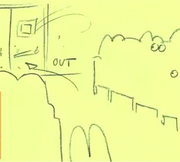 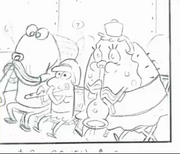 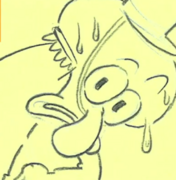 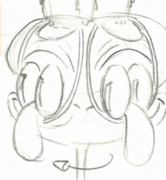 "Squid tries to "inspire" Bikini Bottom's doofy denizens into being a tight marching band – but it's like herding kittens. "Sweet Victory" is like the worst Night Ranger–type power ballad in history."