View source
This is the page about the episode. For other uses, see Atlantis SquarePantis (disambiguation).

"Picture Day"
"Atlantis SquarePantis" is a SpongeBob SquarePants episode from season 5. In this episode, SpongeBob, Patrick, Squidward, Mr. Krabs, and Sandy journey to Atlantis, with Plankton secretly attending as well. Meanwhile, Patchy the Pirate returns home only to discover that Encino has somehow disappeared.

In the beginning of the episode, SpongeBob and Patrick are in Jellyfish Fields blowing bubbles. Patrick tries to take pictures of the bubbles, but they keep popping immediately before the picture is taken. SpongeBob decides to blow a bubble that would last all day. SpongeBob blows a bubble so big that it engulfs them both and carries them into a nearby cave. The bubble suddenly pops as it makes an impact with an ancient piece of gold.

Eager to discover what exactly it is, they decide to take it to the Bikini Bottom Museum, where they run into Squidward. At first, Squidward thinks that SpongeBob and Patrick were planning to steal the first half of the amulet, which is housed in the museum, but upon attempting to return it to its spot, he realizes that what Patrick and SpongeBob had was, in fact, the missing half. At this point, both Mr. Krabs and Sandy join them.

The pieces of gold are then reunited, which summons a luxurious bus (or 'van' as Squidward calls it) piloted by a robot and it's fueled by "song." During the song to fuel the bus, it is revealed that Plankton has stowed away in a compartment at the front of the bus and plans to control the lost weapons of Atlantis and use them to steal the formula, much to the surprise of the viewers.

Once they arrive there, (accidentally crash-landing in a topiary garden) they meet the king of Atlantis, Lord Royal Highness, LRH for short, who shows them the riches, knowledge, and art of Atlantis. Meanwhile, Plankton escapes from the compartment and sneaks into the vault storing the weapons. After looking around at the weapons, he chooses to commandeer a tank (seemingly at random) to start his diabolical scheme.

Meanwhile, Mr. Krabs enjoys the money vault, Sandy enjoys the science lab, and Squidward enjoys the hall of art (the rooms each had been planning to see). In the money vault, money, gold, and prized objects are found and mostly stashed in Mr. Krabs' pants pockets. In the science lab, Sandy enjoys the devices, a biomass-converting device that turns any household object into ice cream (a bug the Atlanteans have not worked out), a germ-fighting, interactive, micro video game, and makes an automatic feeding device. In addition, in the Hall of Arts, Squidward journeys through paintings, is modeled by painters, and even makes his own painting, claiming to have learned more about art in his short time in Atlantis than he did in four years of college.

However, everything goes wrong when SpongeBob and Patrick are left alone with the World's Oldest Living Bubble. The flash from Patrick's camera when he takes a picture of themselves with the bubble causes it to burst and the pair goes to dinner and insist on leaving. When Patrick reveals their mistake, LRH tells them that the bubble they popped was a prop, but when he shows them the real bubble, Patrick takes a picture of it and it also pops. LRH is furious and summons the Atlantean Royal Guards to seize the gang, but Plankton appears with a tank.

He fires the tank at SpongeBob, the gang, and the Atlantean Royal Guards, but is foiled when it is revealed that the weapon he had chosen only shoots ice cream. He jumps out of the tank and in frustration, kicks it, injuring himself. However, LRH seems delighted, saying, "This talking speck will make a fantastic replacement for our recently deflated national treasure!"

Finally, LRH loads SpongeBob and his friends back onto the bus and removes the amulet, giving it to one of his soldiers to dispose of to ensure no more "visitors like these." SpongeBob is the only one eager to return to Bikini Bottom and sings. His friends (including Squidward, Mr. Krabs, Sandy, and even Patrick) get sad throughout the song. Squidward, Sandy, Mr. Krabs, and Patrick start crying near the end of the song, but SpongeBob ignores and sings all along.

Patchy the Pirate plot (reruns after the original airing)

Patchy is stuck in traffic on the US 101 in Encino, California. Then, his cell phone rings, and Potty warns him that he is going to miss the new SpongeBob cartoon. Patchy yells at the person driving behind him, played by Paul Tibbitt, for honking at him because he is trying to talk to his parrot on the phone. Patchy tells Potty to be a dear and record the episode for him, but Potty tells Patchy, "I threw out that old Betamax machine in the garbage." Patchy gets mad, and to make matters worse, his super rare Frampton Comes Alive eight-track also breaks. Then, after Patchy gets his anchor in the boat, the traffic lines move, but suddenly, he finds himself nowhere, and screams over what he assumes is the disappearance of Encino. Then, he cries that this is not the only time a lost city had been experienced. He introduces the episode as he suffers.

Then, Patchy gets his eight-track fixed, but not for long when it explodes again and produces smoke. Patchy later gets hallucinations after becoming dehydrated in the intense heat over running out of food and water and finds a man dressed in a tall SpongeBob outfit who tells him that he is SpongeBob in real-life form and that Patchy will return to Encino if he believes, leading into a happy, fast-paced musical montage of Patchy dancing around, walking to throw away a crumpled up piece of paper, having a picnic by himself, throwing a beach ball, getting a watermelon pelted at him hard and driving an old man reading a magazine, a mother and her baby crazy. Then, after Patchy accidentally drops his strawberry ice cream onto the grass, Potty wakes him up after Patchy mistakenly thinks Encino is back, which was all just a hallucination, as mentioned. Patchy begins to eat a sandwich, which Potty brings to him, but he finds mayonnaise on it, which he doesn't like because mayonnaise gets disgusting in high temperatures. He tries to give it to a vulture.

After this, he finds Encino shrunk to a very small size. Then, he finds three aliens, which explain that their son, Norblock Five, was playing with his Shrinkatron again. Patchy yells at them that he wants his town back in full size and keeps saying, "There's no place like home." Sympathetic over Patchy's loss, Norblock Five's mother gets the Shrinkatron given from her son and she presses the big red button control, making a tornado disaster to fix it up.

Patchy is glad to be back in Encino with everything back to its original size watching the new SpongeBob cartoon he thought he was going to miss, but soon, a giant Potty the Parrot crushes him into the house, closing the episode by showing that Norblock Five had possibly once again used his Shrinkatron to make Potty huge with Patchy reminding the audience to come back real soon for more of new segments featuring him as well as more new SpongeBob episodes.

The special entered production in May 2006, and was delivered to Nickelodeon roughly a year later, allowing time for the network's marketers to promote it.[5] 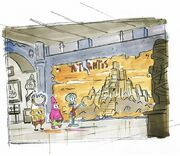 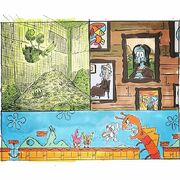 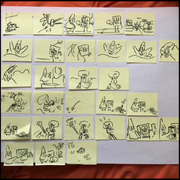