View source
If you were looking for the article about the Greek DVD, then see Aaarg!

"Rock Bottom"
"Arrgh!" is a SpongeBob SquarePants episode from season 1. In this episode, after being inspired by a board game, Mr. Krabs takes SpongeBob and Patrick to go on a treasure hunt.

The episode begins at the Krusty Krab. It's a very slow day with no customers and Mr. Krabs is not pleased with the emptiness. However, SpongeBob is heard shouting his possession of eight gold doubloons. Upon hearing this, Mr. Krabs jumps over to SpongeBob to take the supposed coins for himself. SpongeBob explains to him that he and Patrick are merely playing a board game called The Flying Dutchman's Treasure Hunt, which is based on a real treasure map.

Mr. Krabs sits down to play with them and wins the game. He instantly becomes addicted, even throwing a potential paying customer out and calling the restaurant closed as he continues to play with them, winning 17 times in a row. They play until late at night, when Patrick is passed out and a tired SpongeBob wants to go to bed. SpongeBob goes home, but finds Mr. Krabs there. Despite Mr. Krabs' attempts to persuade him to play more, SpongeBob soon shouts that he wants to sleep, but apologizes as he tells his boss it's only a game. Disappointed, Mr. Krabs stops and realizes he got carried away and leaves, apologizing for his behavior.

The following morning, SpongeBob wakes up to hear Mr. Krabs' voice and finds him in a pirate ship outside his house. Mr. Krabs tells him that they're going to be real pirates and go on a real treasure hunt, as Patrick appears to eagerly join them. However, the two struggle to learn how to act like "real" pirates and end up causing the ship to crash. The trio is forced to continue on foot, following instructions from the map, read by Mr. Krabs, who also tells them that they're not allowed to look at the map. Eventually, the map tells them to go 10,000 paces east from the seaweed with two leaves on it, and Mr. Krabs asks Patrick which way east is. He looks at a compass and points west. After walking 10,000 paces west, they realize that they have taken the wrong direction because Patrick thought Mr. Krabs said, "weast," and begin walking back.

After going around 9,552 paces east, they're exhausted and set up a camp to stay for the night. While trying to fall asleep, SpongeBob and Patrick get excited and find Mr. Krabs gone and the map all alone. They decide to look at the map but when they open it, they realize that it's actually their board game taped to a piece of paper. Mr. Krabs catches them, and they beg for mercy outside. However, his anger is forgotten when they realize that they're standing directly on top of the "X" that marks the spot and start digging. SpongeBob and Patrick use their hands to dig instead of shovels before they find the treasure, and SpongeBob and Patrick ask each other what they will do with their shares.

Upon hearing this, Mr. Krabs greedily says that, since he is the captain, all of the treasure belongs to him. SpongeBob and Patrick get angry and state they deserve a share, since they found it. The trio begins fighting over the chest, as their arguing wakes up the Flying Dutchman, who appears and questions who dug up his loot. Scared, Mr. Krabs quickly blames SpongeBob and Patrick, the Dutchman questions this and they nervously confirm it. The ghost pirate congratulates SpongeBob and Patrick for saving him a lot of digging. He takes the treasure, and gives them two gold coins as a reward, to their joy. Angry, Mr. Krabs asks for a reward, but only receives a tiny plastic treasure chest, which the Dutchman explains is "based on a real treasure chest!" as he disappears, laughing maniacally.

After he leaves, Patrick remarks Mr. Krabs looks sweaty again, somewhat hinting that he now wants revenge on the Dutchman for taking back his treasure while the episode concludes.

A deleted scene in the storyboard of this episode. 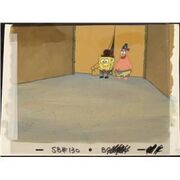 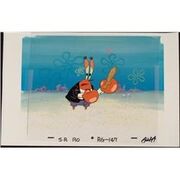 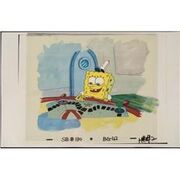 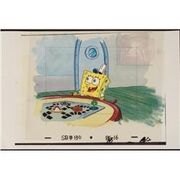 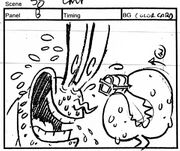 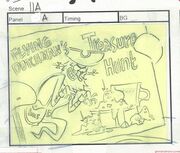 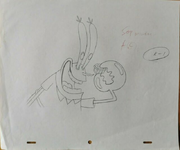 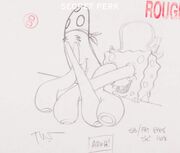 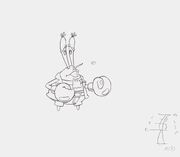 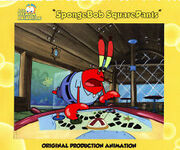 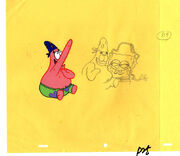