Are We There Yet?

View source
If you were looking for the article about the book, then see Are We There Yet? (book).

"Beware Flying Jellyfish"
"Are We There Yet?" is a SpongeBob SquarePants Atlantis SquarePantis short. In this short, SpongeBob continuously annoys Squidward in a stopped bus saying, "Are we there yet?".

On the bus, Squidward is trying to read a book, but he is continuously annoyed and interrupted by SpongeBob asking him only if they are there yet throughout the short.

Finally, Squidward has had enough and reveals to SpongeBob that the bus has not even started moving yet, as the short ends. 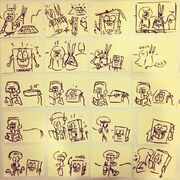